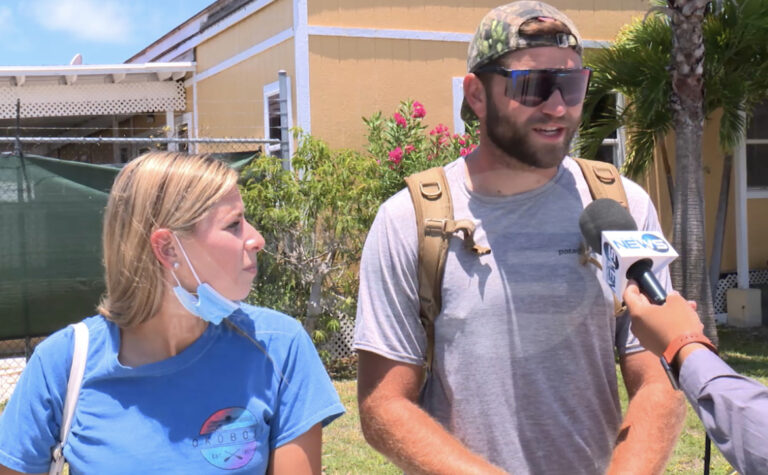 NASSAU, BAHAMAS — Residents, and visitors have called for conclusive answers on the cause of the deaths of three Americans at Sandals Emerald Bay resort.

A couple was found unresponsive in a villa on the resort’s property on Friday around 9am. Another man, identified as Alabama resident Vincent Chiarella, 60s, was found lying on the ground dead.

His wife Donnis, the sole survivor, was airlifted to Princess Margaret Hospital on Friday and has since been transferred to the Kendall Regional Facility in Florida in stable condition.

The group reported feeling ill on Thursday evening and were treated at a local medical facility before discharging themselves, according to officials.

Speaking to Eyewitness News at Exuma International Airport, recently engaged couple and first-time visitors to The Bahamas, Sydney Rosenquist and Chasen Toth, of Mesa, Arizona, who were checking into Sandals on Saturday, had mixed feelings.

Toth said while he has some reservations he looked forward to his stay and felt assured by the government and health officials on the island investigating the matter as well as Sandal’s reputation.

“You know, a little bit of kind of does concern me. but knowing that all the health officials are here and the government, I know that, you know, hopefully, nothing’s going to happen to us,” Toth said.

“But I think that with them all being around and kind of investigating that, you know, we’re going to be pretty safe and, you know, sandals being a big corporation, I’m not too worried.

But Rosenquist said because of the recent nature of the matter and the absence of the cause, she has cause for concern and skepticism

“I’m definitely a lot more skeptical,” she told Eyewitness News minutes before getting onto an awaiting Sandals transportation van.

“I’m the opposite probably of him. It definitely gives me a cause for concern just because you want to know what happened and you’re just like, okay, well, that was just not that long ago; it’s super recent and we’re staying there today, like a day later, so definitely just makes me wonder what happened, but hopefully all is going to be okay.”

Meanwhile, frequent visitor Frank Wedding said he heard about the recent deaths and like many others, wanted to know what happened so his family can be cautious during the remainder of their stay.

Weddng, of Fort Myers, Florida, described his eight-day stay at Casa Del Mar resort, notwithstanding the tragic news, as “perfect”.

In Hooper’s Bay, Exumian Kacy Rolle, said the deaths were a “major concern”.

“Well, definitely what there is major concerns, actually, because when you think about it, we don’t know what actually happened,” he said.

“That’s the first thing. And then too, we just had an incident a few, maybe, what, about year or two ago with a boat incident so it plays major concerns as far as within the tourism industry, especially here for The Bahamas because this is our major industry.

“So, we have to look at any casualties and we’ve got to get a full, I would say, transparency on what took place and push it out there and allow people and allow the world to understand that, okay, it’s still better in The Bahamas like they say and not running away from it.”

Meanwhile, Exuma Island Administrator Cristine Palacious said while the news was tragic, particularly for the families of the guests, it is her prayer that tourism is not impacted on the island.

She said in recent months tourism has been booming on the island, much to the benefit of residents.

“You know Exuma is known for its natural beauty. It’s considered to be one of the most beautiful places in the world. And from what I’ve seen so far, persons are being hopeful, we’re praying that people would see us for that and continue to visit us because of that and because of the hospitality and the friendly people, and the environment that they experience when they get here to Exuma.”

My brother and his wife were there for his birthday , The a/c unit not working his wife open all doors and window that night . When he woke up in the morning and went to the pool his right side was numb could not walk . Called home to family doctor. Was told told no more alcohol drink water cranberry juice flush your system out . They flew to a different part of island in the to a different resort. Family doctor think so kind of poison in his system. He home safe thank god for his wife and family doctor

Well thank GOD he survived.Some people need to clean the air conditioning systems as they harbor bacteria that can kill a person also you have to be cautious about the extermination that hotels use that can poison a person if there is no clean air in the environment.I always think about clean air