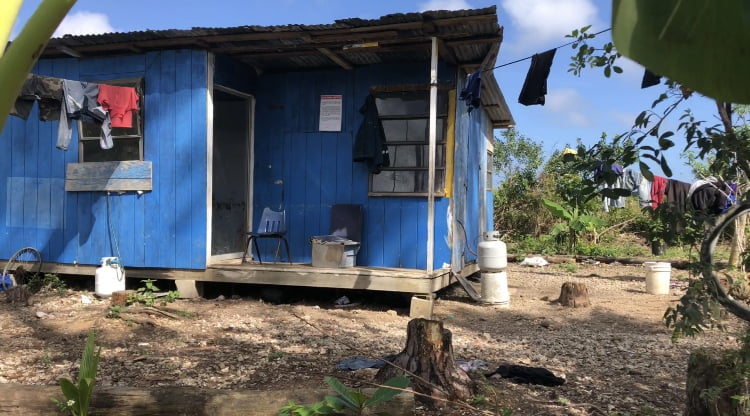 A dwelling in a San Andros shantytown in an area known as The Codd. (Royston Jones/EWN)

SAN ANDROS, ANDROS — Residents of a San Andros shantytown have been given eviction notices, giving them 30 days to leave the area known as The Codd before their homes are demolished.

Officials yesterday told Eyewitness News the area is Crown Land exclusively designated for farming, but has seen an increase of shantytown residents since Hurricane Dorian decimated Abaco and Grand Bahama.

Yesterday, Ferguson confirmed the community was one of two large shantytowns in Andros – the other several miles away in Mastic Point,

The densely populated Codd shantytown is accessible via a track road.

When Eyewitness News entered the community, four people ran into nearby bushes.

Garbage and derelict vehicles littered the outskirts of the community; however, the area was relatively clean, with vegetation and fruit trees occupying space between the makeshift wooden structures.

There was no evidence of utility connections to the unregulated structures, though at least one home had small solar panels on the roof.

The owner of that home is work permit-holder Edwid Demelien, a farmer and father of four.

Demelien, 42, who said he has a work permit to farm, applied to the government to farm on Crown Land.

As he spoke to Eyewitness News, his wife held their young daughter, while her second youngest rode a bike around the home.

Their home has a kitchen, bedroom and toilet – with a makeshift cesspit to supplement the lack of a sewerage system.

A notice dated February 5, and purportedly signed by the Minister of Agriculture Michael Pintard, is fixed to Demelien’s door.

The notice stated the government’s intention to demolish the homes in the area and instructed the residents to leave.

“I came to live here to start farming because I like to farm and I love the business about it.

“I was using someone’s land. Now, the government says we trespassing on [it’s] land.

“I hope they listen because I think if the government wants to do it, all that can happen.

“But, it’s because of the way the system is. If the system would give me the land I asked for I would not be in the same situation.

In the area, some structures were pieced together with a mixture of misshapen plywood and old sheets of metal, and were erected on a handful of cinder blocks, tied to pine logs.

Residents canvassed by Eyewitness News all claimed they had some status to reside or work in the country, but had nowhere else to go.

In front of one structure, which was under construction and roofless, a pile of new plywood sat on top of the raised wooden platform.

Andros Island Administrator Joseph Ferguson said officials on the island, with the government’s support, have mobilized and responded to the growing concern, but consistent and more frequent operations are need to combat the issue.

“We are trying to do our best to contain the overpopulation of illegal immigrants in Andros and we shall do our best,”  Ferguson said during an interview.

“The problem is that Andros is a very lucrative and it is conducive for people to move from Abaco here. We have the land. We have the water. We have all the proper resources to sustain a thriving agricultural community.”

Ferguson said some residents of the shantytowns grow produce and sell it through “creative means” to packing houses.

While it remains unclear whether the increased population of shantytown residents is linked to the thousands displaced from Abaco, Ferguson and other residents believe there is a nexus.

“Every day you see a new one riding a bike or they sneaking through the little corners and stuff,” McCartney said.

“The boat comes in and a few jump off the boat. One or two come off the plane, especially right after the hurricane, so it really an expansion. It’s really bad because it’s impacting the farmers. They are farming on people’s land.”

Yesterday, shantytown residents pleaded for more time and the government’s leniency and help.

Evitha Innocent, 62, a shantytown resident of 17 years, said she has nowhere else to go.

“I don’t know where to go, I have nowhere else to live,” she said with the help of another resident who translated from Creole to English.

Claudette Noreese, a mother of one and farmer, said: “I want the government to know if I can stay here because I don’t have anywhere else to go or if they can find a place for me to be because nowhere else to go.

Noreese has lived in the shantytown for 12 years, and yesterday said the threat of eviction has caused her distress and anxiety.

“We can’t eat. Even when we get food to eat we are thinking we have to move. And my child in my hands right now, I don’t know where to go with them. We are asking please, please for the government to help us out.”

Clenise Lewis, who is married to a Bahamian and has lived in the shantytown for seven years, vowed she will leave after the 30 days period was complete and the government brings in tractors to demolish the area.

Asked where she will go, she shrugged, saying she did not know.

“I ain’t got place and I have two children,” she said.

“Whenever government carries tractor, I just bring my two children and leave the house because I ain’t get place; I don’t work; I don’t pay house.”

Markinson Joseph, who said he works at the Bahamas Agriculture and Marine Science Institute (BAMSI) called on the government to show them leniency.

Give him the land he ask for mr, its complicated for born and bred bahamians to get crownland ,how do you think our government can give it to you??gatta be a joke ?cant b serious

They came to The Bahamas not knowing anything, broke the laws to be here, and when caught by immigration, they like to claim that they know nothing about Haiti, so what is the difference? going back to Haiti should not be a problem, just like when they came here and knew nothing about living here, but they survived, PS, there are so many Bahamians suffering in this country, and the first thing people like to say is Bahamian don’t like to work, but ìf taught from elementary age the value in food production and that it is a billion dollar industry, then young Bahamian minds would turn towards farming, so i say, send all illegals home and those breaking the law, put a law in place to revoke citizenship of any naturalized citizens who are found guilty of offenses and send them back to country of origin, because i believe a lot of crimes committed in the Bahamas are done by them and now they are hiding behind changing their names through DEED OF POLE, if something is not done to curb this influx, eventually we’re going to have a civil war

Agree with you ?, time to pack up and go, let the younger generation of Bahamians have a chance, in their Country!

Sorry , but if you are undocumented it doesn’t matter how long you been here you are illegal and should be sent back to your homeland

We are being bamboozled left right and center by these people. How could I go into a country illegally and expect the government to take care of me and give me land?‍♀️ only in the Bahamas. Let Bahamains go to Haiti and try that. How can you have compassion for what is evil

building code = safety. but when you get wiped out, you want government help?

come to the US! we love that!

Bro, what you do not want is a Civil War with our Haitian Brothers and Sisters. You are very Foolish to say such Nonsense in the First place. It is because of the Haitian Revolution that Slavery for all Negroes came to an Abrupt End, hence because of their Struggles against their Slave Masters, we Negroes are all Free from Slavery Today.

YouTube the Haitian Revolution for yourself and See for yourself what Our History is all about. And Bahamians Gotta be very Careful and Tender while Dealing with The Creator, who is in Heaven, most Special People on His Planet Earth. It is often Said by many of the Brothers on the Streets that the Haitian Population, represents the True Israelite Tribe of Levi.

Why are Haitian living in the Bahamas expect so much from our government, when generational bahamians have a difficult time obtaining these requests. We cannot acquire land or erect buildings without government approval.I love you Haitians but you all are too aggressive. As proven in Abaco after Dorian you people are not Bahamian friendly and will try to overthrow our goverment and destroy us the moment the opportunity present itself. Humble yourselves and turn back to your GOD you Levites and GOD will remove the curse that he placed upon you all. Whom GOD curse, no man can bless

Imagedefendinginerrancy.com › Genesis_…
Genesis 49:5–7—How can Jacob pronounce a curse upon Levi here and yet Moses – Defending Inerrancy
As a punishment for their crime, they would be scattered among the other tribes of Israel so that they would not obtain a land possession of their own. However, the curse upon Levi was turned into a blessing for all the …