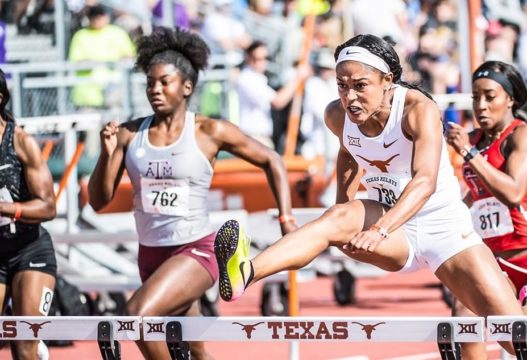 Following a dominant performance on the track over the weekend at the Texas Invitational, University of Texas (UT) sprint hurdler Pedrya Seymour, was named Big 12 Women’s Athlete of the Week for her efforts.

Seymour scored a pair of victories at the annual event to help the Longhorns dominate the meet and pick up a victory over conference rival Kansas State University (KSU).

Seymour jumped out to a quick lead in the women’s 100-metre (m) hurdles and cruised to a win with her time of 13.16 seconds.

She also ran the opening leg of Texas’ 4x100m relay team, which won the event with a time of 45.56 seconds. Texas was able to cruise to a win after Seymour set the tone on the first leg to get ahead right away and eventually finish more than half a second ahead of second place.

“It was a good experience,” Seymour said about her time at the Texas Invitational.

“I’ve been battling little injuries here and there, so I haven’t been able to have effective practices. Coach Bailey said she ‘was pleased with my performance’, so I’m happy with it.”

Despite coming up with wins in two events, Texas interim coach Tonja Buford-Bailey said, Seymour and several other athletes weren’t thrilled with their times.

“They weren’t happy with their times because the kids are obsessed about their marks,” Buford-Bailey said.

“But we’ve got another race next week and one after that so, the times are going to come. We just executed some of the things we were working on so, that’s the most important thing.”

Saturday’s meet was also bittersweet for Seymour and the other seniors, seeing that it was their final opportunity to compete inside the Mike A. Myers Stadium.

The Texas women’s track and field team will be back in action again Thursday at the Bryan Clay invitational in Azusa, California.