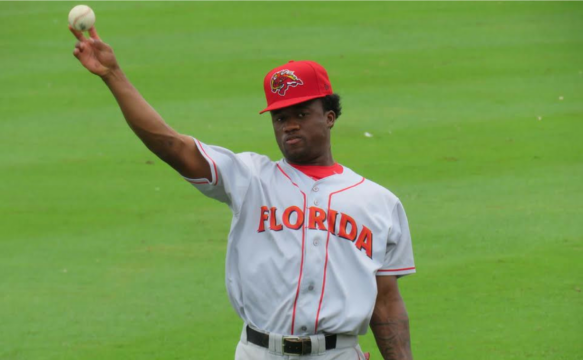 In his fourth year as a professional player, Anfernee Seymour has been promoted to play Double-A baseball for the first time in his career.

The 22-year-old made his debut on Saturday with the Jacksonville Jumbo Shrimp, the Double-A affiliate of the Miami Marlins. The Jumbo Shrimp currently play in the Southern League and have a 22-31 record.

Seymour was released from the Fire Frogs, the Atlanta Braves’ minor league affiliate, on May 6, then resigned with the Miami Marlins on May 10.

Despite playing in just 78 of the team’s 118 games, he ranked fourth on the team in hits (84), fourth in triples and second in stolen bases.

Prior to the promotion, Seymour enjoyed his most successful season at the plate in his young minor league career.

Through 28 games with the Rome Braves in the South Atlantic League, Seymour hit .287 with six RBI, an OBP of .345 and snagged eight stolen bases in 11 tries.

The Marlins originally selected Seymour in 2014 with the 197th pick in round seven of the Major League Baseball (MLB) Draft.

This article was written by Eugene Stuart, Eyewitness News intern.