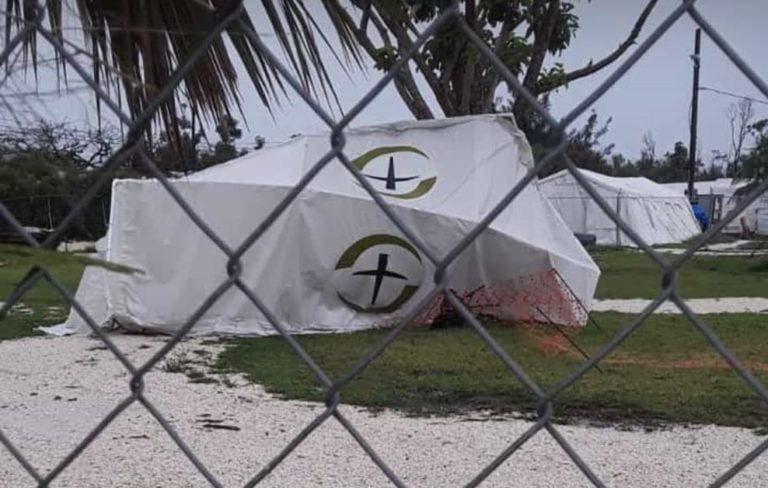 The field hospital — a 40-bed tent facility — was established with the assistance of Samaritan’s Purse after some 80 percent of the Rand Memorial Hospital damaged by Hurricane Dorian in early September.

Health minister Dr Duane Sands told Eyewitness News that officials were on the ground now securing the facility but underscored the infrastructure was not built to withstand storms.

And with the start of the 2020 Atlantic Hurricane season just weeks away, Sands said today’s severe weather “is just a foreshadowing of what could potentially happen”.

“Localized flooding is also possible during these events.”

Repairs to the RMH have been delayed by COVID-19, and there is no definite timeline on complete at this time, according to the minister.

“We will just have to continue to work on completing the Rand Memorial renovations,” Sands said.

“It is behind schedule, a number of contractors had to leave the country because of COVID-19 and others have been devoted to the COVID build-out. We just have to respond to it. Hurricane season is coming and obviously the weather system on Grand Bahama is just a foreshadowing of what could potentially happen.

“This is an evolving situation.”

There have been seven confirmed cases of COVID-19 in Grand Bahama to date.

Photos and videos obtained by Eyewitness News show the tent thrashing mercilessly in the wind, while recordings from inside the tent show strong gusts and rain ripped through the tent knocking over medical equipment.

“On Friday it also stormed,” said one healthcare worker who spoke on the condition of anonymity.

“The rain came and we had to run out of there because the tent was lifting up, and we all had to run from there. It’s just unsafe, people walking around there with the boards around the tent. It’s slippery, a few people fell down.

“What can be done? It’s inhumane, and it’s really awful. I’m saddened to know colleagues were in there with patients.”

The worker added: “And with COVID-19, what is the true numbers, true testing in Freeport? How many tests have they done in GB? It’s a fear that a lot of nurses are having. Working here is like working in a war zone.”