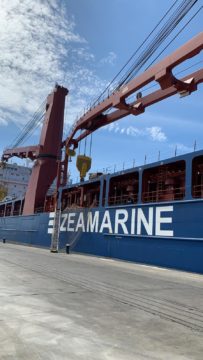 NASSAU, BAHAMAS – A ship carrying seven new multi-fuel engines for Bahamas Power and Light (BPL), arrived at the Arawak Cay Port from Finland on Tuesday afternoon, giving consumers a glimmer of hope that their electricity woes may soon come to an end.

The new engines are expected to remove dependence on rental generators and place BPL on a path to energy security.

The latter will become available in The Bahamas when Shell completes its power plant in The Bahamas, slated for 2020 or early 2021, according to Parker.

“We at BPL are incredibly excited. The arrival of these engines marks the next step in our evolution as a company,” Parker said.

BPL has been challenged for years to reduce intermittent power outages, especially during the summer months when a strain is placed on the power plant’s generation.

But in an effort to resolve the long-standing problem, the power provider contracted Finnish Technology group, Wartsila, to install a new 132-megawatt engine power plant at Clifton Pier, which is expected to house the seven new Wartsila engines at its Station A.

“What’s going to happen is over the next month, these engines are going to be transported from the dock into the Station A engine Hall at our Clifton Pier Power Station, and once they are onsite, they will get hooked up and connected,” Parker explained.

“That process is expected to take a good few months because they are incredibly complicated engines that have computer-assisted diagnostics and control systems.”

Parker further explained that the ancillary work to create the engines for Station A initially began in Sweden based on the exact measurement and specifications given.  He said the engines were then disabled, labelled, packaged and shipped to The Bahamas to be reassembled at Station A.

“The forecast of all of our executives is that once Station A is up and running, which is 132 megawatts, Station A would return the Clifton Pier Power Station to a base load station, which will mean that we will be burning cheaper and more efficient energy first, which will bring down the cost of electricity,” Parker said.

“Because it will be our own engines and our own power station, the commissioning of Station A is expected to bring an end to the need for rental generation and it will mean that here in New Providence we can finally get out of having to rent millions of dollars of rental generation on a yearly basis.”

As it now stands, Parker said the goal and expectation to open Station A is by the end of this summer.

“Nobody wants to be more specific than that because we are pushing to get the station built as quickly as we can, without compromising the integrity of either the engines or the buildings or the process. That is why the Chairman and our Executive Director and CEO all say at the end of the summer 2019,” Parker said.

According to the BPL PR Director, the creation of the entire Station A will cost $95 million dollars and the seven new engines are a part of this cost.

Meanwhile, despite an earlier promise made by Chairman of Bahamas Power and Light, Dr. Donovan Moxey, that there would be no load shedding this summer, Hugh Rollins, the Executive Director of BPL told media last month that customers can expect more power outages leading into the summer months as the Corporation readies itself to install a new power plant engine and continues to rent generators to compensate for aging equipment.

New or rebuilt ones