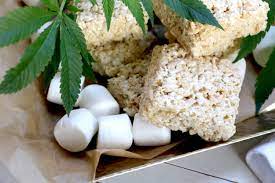 In an interview with Eyewitness News, Rolle said: “Four children were taken to the hospital by ambulance from S C McPherson School and last evening three persons were taken by the parents, who said the children went home and were not feeling well.

“We have a 14-year-old male in custody at the Drug Enforcement Unit who allegedly made some cakes which he took to school and distributed to those four persons and they in turn shared with some of their friends.”

In a statement on the matter, police said the student allegedly brought marijuana-infused Rice Krispy cereal treats to school and sold them to students.

Those students admitted to consuming the marijuana-infused treat.

Rolle said the 14-year-old boy is in “custody and he is expected to go to court tomorrow”.

Earlier this month, during a press conference at CDU, police advised they were investigating new trends of edible marijuana being used and sold in The Bahamas.

DEU Officer in Charge Chief Superintendent Roberto Goodman said that over the past three years, police have seen a significant increase in edible marijuana products.

Goodman noted that 23 people were arrested in 2019 and 11 in 2020 in connection with possession of the products.

He said in the first quarter of 2021 there were three people arrested for gummy bears, cookies, THC oil and syrup, along with other items that have marijuana infused in them.

“The drug enforcement will have no tolerance for that and we are going to enforce the laws that are on the books,” he said.

The trends also emerge as the government determines its position on the decriminalization of marijuana in the country.

The Bahamas National Commission on Marijuana (BNCM) has completed its survey codifying the views of Bahamians on the legalization of cannabis in the country and preliminary analysis of the data showed Bahamians are moving away from traditional views on the matter and are cautiously willing to consider something different.

The BNCM recommended that marijuana be decriminalized for people at an appropriate age and that individuals be allowed to have a maximum of one ounce of the substance in their possession without prosecution.

Prime Minister Dr Hubert Minnis has suggested that cannabis reform laws are on the horizon and has expressed support for the release of all prisoners incarcerated for the possession of small amounts of marijuana.