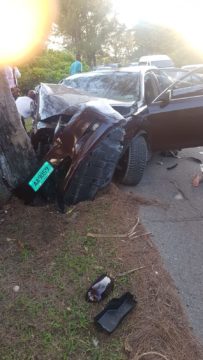 NASSAU, BAHAMAS – Head of the Royal Bahamas Police Force Traffic Division, Chief Superintendent Craig Stubbs, told the media on Saturday that seven occupants of a vehicle travelling on West Bay Street on Saturday evening, which collided into a tree, were all treated for their injuries at the Princess Margaret Hospital.

Eyewitness News Online understands that the female driver of the vehicle was travelling East on West Bay Street when the vehicle reportedly slammed into a Casuarina tree. The driver and several passengers, many of whom were children, were said to have been trapped in the vehicle and police had to use the Jaws of Life to extricate the passengers.

According to an eyewitnesses at the scene, a nurse and a doctor was present to assist the injured passengers and several ambulances were also summoned.