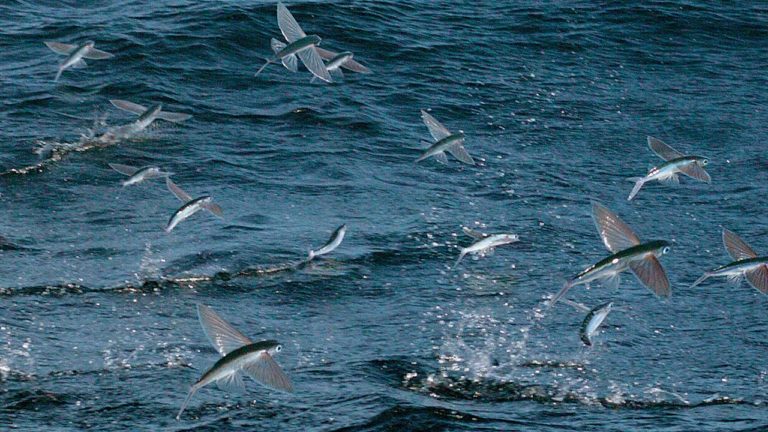 BELIZE CITY, Belize (CRFM) — Seven Caribbean countries are participating in a recently launched series of subprojects which the Caribbean Regional Fisheries Mechanism (CRFM) is leading under a sustainable management initiative for the flyingfish fishery.

In highlighting the importance of the initiative, CRFM executive director, Milton Haughton, said: “We in the region are utilizing a common space and common living marine resource; therefore, we need to cooperatively manage these common interests. One of these common interests is the flyingfish fishery, and the governance framework developed for the flyingfish fishery could be scaled up and applied to other fisheries in the region.”

The CRFM, the agency which provides fisheries-related advice and recommendations at the CARICOM level, initiated six sub-projects during 2017 to implement the Ecosystem Approach to Fisheries (EAF) for the management of the four-wing flyingfish in the Eastern Caribbean. This species of economic and cultural significance to the region is harvested by over 1,700 boats across the Eastern Caribbean countries and in Martinique.

The sub-projects are being implemented in the focal countries of Barbados, Grenada, St Vincent and the Grenadines, St Lucia, Dominica, and Trinidad and Tobago, plus the French Overseas Territories of Martinique and Guadeloupe.

The sub-projects, intended to support the long-term sustainability of the flyingfish, are part of the project funded by the United Nations Development Programme (UNDP) Global Environment Facility (GEF) titled, Catalyzing Implementation of the Strategic Action Programme for the Sustainable Management of Shared Living Marine Resources in the Caribbean and North Brazil Shelf Large Marine Ecosystems (the CLME+ Project).

The CRFM contracted Blue Earth Consultants, a division of the Eastern Research Group, to lead three of the six flyingfish sub-projects in collaboration with a team of local and international partners. The Caribbean Natural Resources Institute (CANARI) in Trinidad and Tobago and Nexus Coastal Resource Management (Nexus) in Halifax, Canada, are leading the remaining three sub-projects.

Blue Earth Consultants will work with stakeholders and officials in the focal countries at both technical and political levels until the subprojects conclude in mid-2019. The team is taking a participatory approach to gaining feedback and it will lead a consultative process to updating the Eastern Caribbean Flyingfish Fishery Management Plan (FMP).

The FMP provides context and guidance for the management of the Eastern Caribbean region’s flyingfish fishery, developed through a process of extensive research, regional cooperation, collaboration, and stakeholder consultation. Endorsed for regional implementation in 2014, the plan was the first of its kind to have been sanctioned by the Ministerial Council of the CRFM, consistent with the Caribbean Community Common Fisheries Policy.

Under this initiative, a sub-regional data policy will be developed to provide guidelines on how countries and Overseas Territories participating in the flyingfish fishery will collect and share data. The current status of flyingfish fishery data collection will be investigated and legal and drafting support will be provided by the consultants to develop template regulations for countries to implement. New recommendations will also be developed on vessel licensing arrangements and a census will be conducted on existing fishing vessels used to target the flyingfish.

The initiative will support improved cooperation between the 17 CRFM member states and France on the management and conservation of shared living marine resources. Regional cooperation is vital to the sub-projects, given that flyingfish are a migratory species fished by six CRFM countries and the French Territories. Therefore, the project is developing a cooperation agreement for the CRFM States and France, based on stakeholder and expert inputs.

Throughout the course of the three sub-projects to be led by Blue Earth, information products will be developed and shared with stakeholders and the public to increase understanding of the flyingfish fishery and the sub-project outcomes.

The CLME+ Project was catalyzed by a US$12.5 million grant from the GEF, matched by government, multi-lateral and other funding for a total of more than US$146 million.