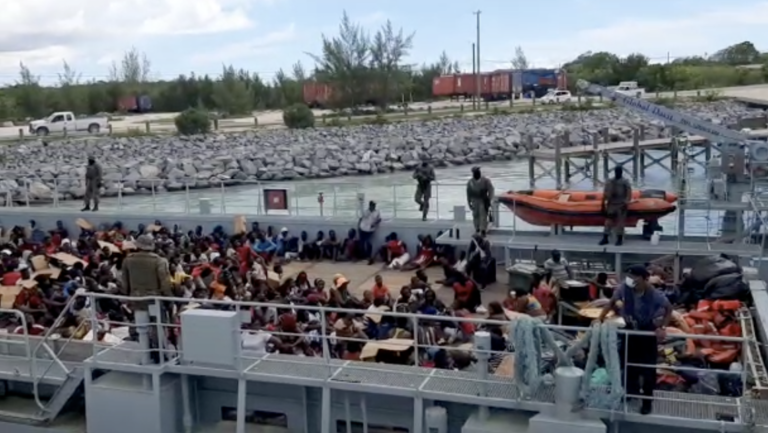 NASSAU, BAHAMAS — Minister of Immigration Keith Bell said yesterday that the Haitian government has expressed it is having “serious technical issues with the airport” in Port-de-Paix, preventing The Bahamas from beginning the repatriation of migrants being held in the southern Bahamas.

Over 400 migrants were expected to be repatriated yesterday morning.

More than 1,000 migrants have been apprehended since last week, with hundreds more expected to be en route.

Another 137 Haitian migrants were apprehended on Wednesday.

In response to questions from the media on the developing migrant matter, Bell said the government expects to be able to repatriate the men and women, all of whom are expected to appear before the court, no later than tomorrow.

“We will commence the repatriation exercise no later than tomorrow and if we get word from the Haitian government — I think they will use an alternative airport — if that get sorted out today, then we will do that today,” Bell said.

“Bahamasair has made two aircraft available to the government.”

Bell and other government officials met with the League of Haitian Pastors.

Residents on the island have expressed concern about a potential revolt and the potential spread of the coronavirus with large numbers of migrants being held in close proximity.

As soon as the rbdf spot they ass in the water coming, don’t bring them to shore. Make them turn that seem damn boat around an send them back the same way they came…to much of our Bahamian dollar getting wasted on housing feeding an transporting them back to their home. We shouldn’t have to pay for it. Why they don’t jail them for breaking the law by coming into or country illegal? Why we have to be bending over backwards for them when they sneaking in? This ain’t right at all. Come into our country the right way. Obey our laws an leave when you should.