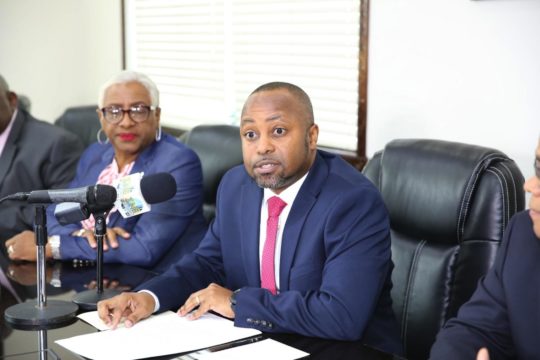 MAKING THE ANNOUNCEMENT – Minister of State for Grand Bahama, Senator Kwasi Thompson, speaking during a press conference and official signing of Letter of Intent for the Purchase of the Grand Lucayan on Wednesday, March 27, 2019. Looking on is President of the Senate, Katherine Forbes-Smith.

The announcement of the signing of a Letter of Intent between Lucayan Renewal Holdings and Royal Caribbean International/ITM has brought much hope for the people of Grand Bahama.

We intend to commence exclusive negotiations immediately with the joint venture group with the intent of signing an Agreement for Sale and Heads of Agreement.

Why would the PLP criticize a project that could bring the much-needed relief to Grand Bahamians? Does the PLP really want Grand Bahama to succeed? Would those who criticize prefer Grand Bahama to remain in the state it is in and the Government not to try to make things better?

The PLP questions the estimated 2,000 jobs this project could create. The RCI/ITM joint venture includes a hotel development, water park and cruise port development at the Freeport Harbour. It also includes transportation between both locations. While this number is only an estimate the PLP had no difficulty accepting Paul Wynn’s first proposal which they touted just before the general election. That proposed development had an estimated 1500 jobs and did not include a water park or cruise port development.

The PLP actually said that the proposed RCI/ITM development is not a meaningful investment for Freeport. In 2018 Grand Bahama welcomed 775,000 cruise passengers, most of which came from Carnival Cruise lines.

This development could bring more than two million passengers to Grand Bahama, which more than doubles the number of cruise ship visitors travelling now. This is huge for taxi drivers, straw vendors, tour operators, restaurants and shops.

The development also improves our overall destination. Most cruise lines did not regularly call on Grand Bahama but this could all change with the proposed development.

The development will also include an airlift and marketing component which will positively impact the hotel and the rest of the island. This component will be negotiated in the Heads of Agreement.

It also connects the Freeport Harbour, the Hotel property and the Port Lucaya area. There will be an incentive for passengers to be moved from the Harbour area to the Port Lucaya area, which has always been a challenge. This is a win-win for all areas of tourism in Grand Bahama.

The Government and the people of Grand Bahama recognize that the LOI is only the first but significant step for this development and would encourage the PLP to put aside their partisan rhetoric and support what is clearly an amazing opportunity for Grand Bahama’s rebirth. We invite all Grand Bahamians to ignore the naysayers and prepare themselves for this tremendous opportunity.