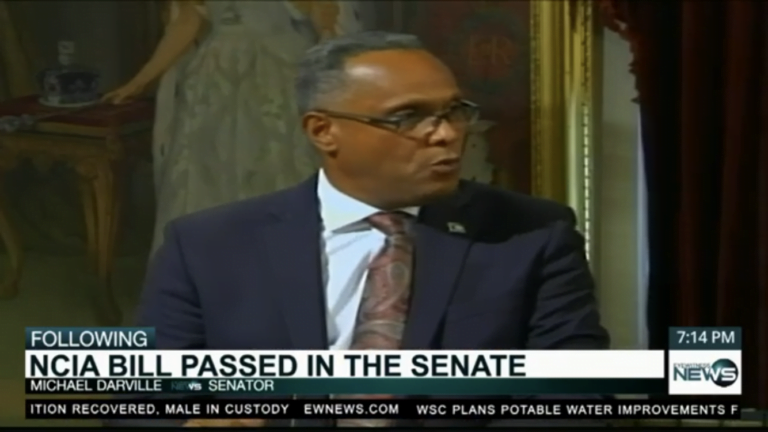 The four opposition senators voted against the legislation.

The bill will establish a government agency, referred to as the NCIA, to gather intelligence on individuals and/or entities which pose a potential threat to the national security of The Bahamas.

During debate, Senator Dr. Michael Darville expressed grave concern with a provision that makes it a criminal offense to publish, broadcast or otherwise identify an agent or authorized officer of the agency.

He said members of the public have a constitutional right to request identification of an agent, who conducts a search or demands information of them.

For example, agents or authorized employees of the agency may request an operator of an aircraft or vessel to produce documents relating to the aircraft, cargo, vessel, crew, passengers or voyage.

Refusal to comply with the request, upon conviction, carries a $5,000 fine and/or a term of imprisonment not exceeding five years.

As pointed out by Darville, section 13 of the bill indicates that other than members of the Review Committee, no one shall — without the written consent of the prime minister of director of the agency — publish by print, radio or broadcast or otherwise make public the name of an authorized officer or agent.

“I am very concerned about it because I have a constitutional right to ask any police officer or any agent who is going to investigate or search any property of mine, the name and the identification of the agent, and I have a right to be able to present that information to anyone whom I choose to protect my interest,” Darville said.

“And between you and I, I don’t see if I do that how I can be in violation of any law because you are affecting my constitutional right.”

He said while national security is paramount to the safety of The Bahamas, further work is needed on the bill to ensure it is more palatable.

Darville said while in opposition the Free National Movement did all it could to destroy the concept of an intelligence agency, but has since brought similar legislation to the draft the Christie administration brought before Cabinet.

Bethel argued that the opposition had “found Jesus, like Saul on the road to Damascus”.

“Suddenly they see some light,” he said.

“I think it is a black light, not a bright light. It’s a dark light, but they see a light. This is the same group, government in their term, in which the leader and acting leader were members of the executive — Cabinet ministers.

“They were policy makers. They sat there and agreed to a situation where an NIA agency had been formed right over there in the Neville Bethel [Senior] building on Nassau Street without any legal basis; without any lawful authority; and now they sit around when we bring an act to institutionalize and create this entity in law, [and] suddenly like Saul on the road to Damascus, they see the light. No. No. No. We don’t want this, don’t do this; rank hypocrisy.

Upon assuming office, the Minnis administration disbanded the National Intelligence Agency, which had been operating for five years under the previous administration in the absence of legislation to govern it.

The Christie administration repeatedly promised to introduce legislation to govern the agency, but never did so.

According to Minister of National Security, Marvin Dames, the NIA worked without the support from law enforcement agencies in The Bahamas and was essentially defunct.

The government introduced and passed the NCIA last month.

Yesterday, Bethel insisted the NCIA is necessary to prevent The Bahamas from becoming a potential staging ground to harm “our neighbors,” he said once enacted the nation will be better able to defend its sovereignty and democracy.

According to the attorney general, the bill has been used by some to spark unreasonable fears, but those who would do so are “desperately wrong”.

The opposition has also taken exception with the way the director of the agency is appointed and the powers of the minister.

The bill notes that the director will be selected by the governor general on the advice of the prime minister after consultation with the leader of the opposition.

But Bethel said the minister cannot give a direction without putting it in writing and publicizing it.

He said, “Yet, we see a false argument based only on the fact of the ability to give directions without pointing out that power is severely limited in this act; severely and constrained by the duty and obligation to put it in writing and to publicize it.”

Opposition Leader Philip Brave Davis said last month that should the Progressive Liberal Party (PLP) win the next general election, it would repeal “all offensive provisions” of the NCIA and make it “more palatable to the true intent”.