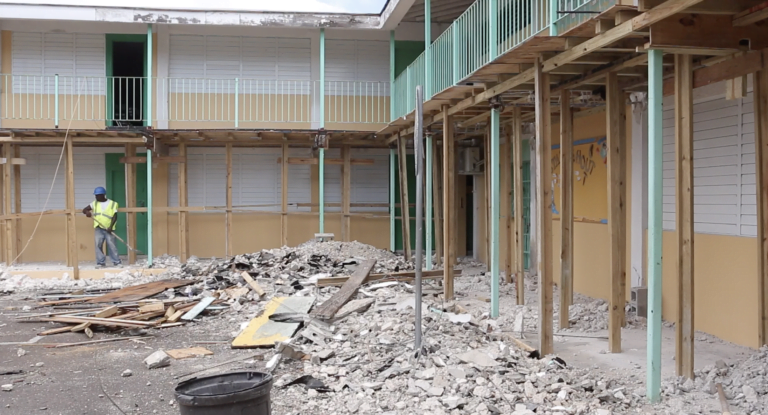 NASSAU, BAHAMAS — Minister of Education Jeffrey Lloyd indicated yesterday that the nine schools under repairs have reached the 75 per cent completion mark and said he remains confident that they will be ready for the new academic school year, set to begin in September.

Lloyd spoke to the media before heading into the weekly Cabinet meeting.

“We are approximately three weeks away from the opening of school and generally those nine schools are in the neighborhood of 75 per cent ready,” the minister said confirmed

He once again expressed optimism about the readiness of the schools following criticisms in some quarters, including the Bahamas Union of Teachers (BUT).

BUT President Belinda Wilson has said she was doubtful about the school’s being completed in time for the new academic year.

However, Lloyd said he has been closely monitoring the progress on the schools under works and remains confident in the contractors on the job.

“I am checking on the schools every single day and I am very satisfied that the contractors are on schedule, and in some instances ahead of schedule,” he said.

“I am very pleased about that.

“You will remember that there are nine New Providence schools, which are in [a] critical state and those contractors are doing an extraordinary job.”

At that time, Minister of Public Works Desmond Bannister, who also toured the schools, said that the buildings were old and it was understandable that such extreme renovations were needed.

During the tour, however, poles were still exposed in some areas.

Some classrooms were still under heavy construction and the balconies were still being outfitted.

There were suggestions that the minister’s projected timeline for completion was ambitious.

But the minister said he is not fazed by those suggestions.

“It is ambitious because of the nature of repairs and because of the time frame; that is why we were very selective in picking our contractors,” Lloyd said.

Asked whether the ministry had to request more funding to finance repairs, Lloyd said, “No, we had those $30 [million] or $45 million in our budget and we just had to reallocate that to deal with the more critical repairs.”