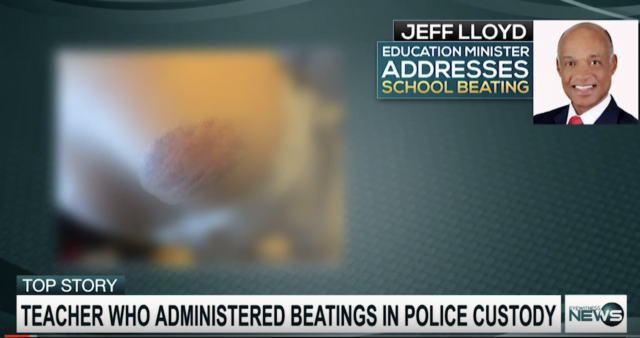 NASSAU, BAHAMAS – A private school administrator could possibly face charges over the alleged beating of a male student.

Eyewitness News Online understands that the male administrator was taken into police custody on Thursday and an investigation has been launched.

The family of the boy involved posted to social media earlier this week, expressing their concern after the alleged incident caused significant bruising on the child’s buttocks.

Education Minister Jeffrey Lloyd expressed that such acts are a last resort at public schools and should be administered in a proper manner.

“You know there is a debate in society right now where some people feel like corporal punishment should be eliminated,” said Lloyd on Wednesday shortly after the 2019/2020 budget communication.

“There are those who believe that corporal punishment such remain in the hands of a teacher or an administrator and that debate will obviously continue, but the government will have a final say after there is proper vetting and discussion with the relevant stakeholders.

“However, there is a very clear rule in the government’s manual with regard to corporal punishment.

“So the issue of corporal punishment being willy-nilly applied is something that is not sanctioned by the government, and it is repudiated at every instance that it has occurred.

“Our children should not be abused. That is not the intention. That will not be accepted and any incidence of abuse; whether it is moral, physical, intellectual or otherwise, will be strictly met with the most vigorous resistance by this minister and his ministry.”