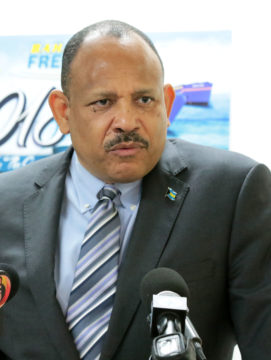 NASSAU, BAHAMAS – Minister of Health, Dr. Duane Sands, on Wednesday warned that despite the increased use of marijuana-related products worldwide and in The Bahamas, the Dangerous Drugs Act remains in effect.

“As such, marijuana, cannabis, THC and Cannabidiol [all derived from the marijuana plant], remain illegal without a license,” Sands warned while making his contribution in the House of Assembly yesterday.

THC or tetrahydrocannabinol, a marijuana-derived ingredient, is known to offer the greatest psychotropic effect or “high,” while Cannabidiol (CBD) is considered to have potent medicinal effects.

Sands revealed that this year, CBD has become the hot new product that is being incorporated into may items and marketed as oil or into products that can be ingested, smoked, vaporized and applied to the skin or hair.

Sands said The Bahamas has also developed a keen interest in Cannabis.

He noted, however, that while the government acknowledges the interest, local deliberations by the appointed marijuana commission have not been completed to legalize marijuana or marijuana-related products.

The health minister also noted that having empaneled the marijuana commission, the government will not circumvent the work of the commission by the issuance of multiple licenses to persons who are interested in selling various marijuana-related products.

“So, individuals who are selling marijuana, hemp and Cannabidiol [CBD] products are doing so illegally,” Sands said. “Those who are doing so, may or may not be selling authentic products and the buyer would have no guarantee of safety or efficacy.”

The health minister said he has been informed that the police forensic team have also done analyses on some of the confiscated samples and there appears to be an inconsistency in the content as some of these products do not contain CBD.

Dr. Sands further noted that  the Ministry of Health has met with the Customs Department and the Royal Bahamas Police Force, and all parties have collectively affirmed the legal position that all products imported, advertised and sold containing any of the components of marijuana, as outlined in the Dangerous Drug Act, are being sold illegally.

“Unless and until the legislative framework is changed, the laws of the Bahamas remain,” Sands stressed.

Sands said while the government acknowledges the changing environment, the law as it relates to marijuana is neither gray, uncertain nor nebulous.

“We encourage vigorous debate and participation in the process to affect desired change or to maintain the status-quo.

“We enjoy a healthy democracy where contentious and controversial issues can be discussed and ventilated.

“It is through this process that nation building continues,” Sands said.

Meanwhile, Sands told parliamentarians yesterday that while the co-chairs of the appointed marijuana commission are making progress, their work is not yet done and they have asked for a three month extension.

The marijuana commission is expected to examine the view of Bahamians toward marijuana and to make recommendations for reform.

The commission is chaired by Bishop Simeon hall and retired deputy commissioner of police, Quinn McCartney, and is composed of a diverse group of Bahamians.

“They have been working for more than three months but their work is not yet complete,” Sands revealed yesterday.

Their work of the marijuana commission is funded by the government and the secretariat is supported by the Ministry of Health.

The commission’s report, once completed, will be presented to Cabinet.