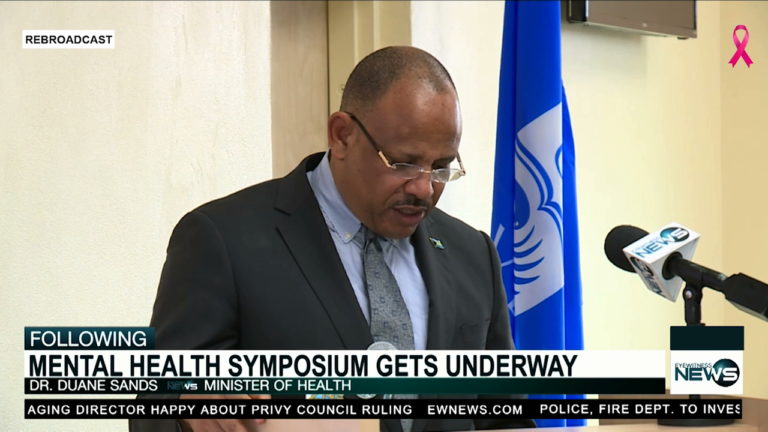 The health minister said it would be “naïve” to think that the youth and young adults of The Bahamas are immune to the risks and effects of mental illness or substance abuse disorders.

The World Health Organization records that 14 per cent of the global burden of disease is attributed to mental, neurological and substance use disorders.  The health minister explained that some 75 per cent of persons affected are in many low-income countries and do not have access to the treatment they need. It is because of this data that he mentioned that there are no surprises that mental and substance use disorders are the leading cause of disability worldwide.

According to Dr. Sands, it is incumbent upon society to use forums such as yesterday’s symposium to foster an acceptance that good mental health is essential at every stage of life, from childhood and adolescence through to adulthood.

“It is important that we raise the prominence of mental health across the health spectrum in our interactions,” Dr. Sands said.

“Living in conditions of homelessness, poverty and desperate want serves as clear evidence of the need to focus national attention on mental health issues and services.”

Dr. Sands said both the World Health Organization and the World Federation for Mental Health have advised that young adults are at the age when serious mental illnesses can occur, but they are taught little to nothing about mental illnesses and well-being.

“These findings seem even more sobering when we realize that mental illness greatly increases the risk of contracting other serious medical conditions like HIV and other infections as well as non-communicable diseases like diabetes and heart diseases,” he said.

Dr. Sands shared with the conference attendees that an essential element of the public drive is the need to address stigma and discrimination.  These twin issues, he said, often prevent people from seeking mental health care, presenting an ongoing barrier to accessing necessary treatment.

He added that far too many affected persons are overlooked because there are no obvious signs of their distress.

He also encouraged members of the mental health field to continue to champion the cause of persons affected by mental illness through public education, awareness and activism to expand access to care.