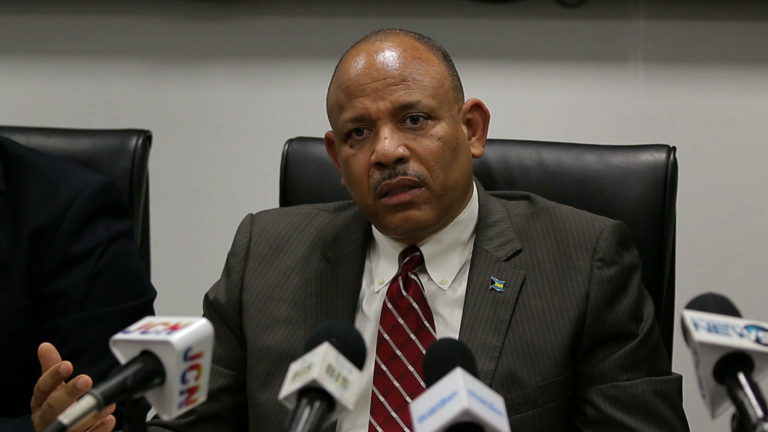 NASSAU, BAHAMAS – Health minister Dr. Duane Sands stated emphatically on Tuesday that contrary to media reports, his ministry, the Public Hospitals Authority (PHA) and the Bahamas Nurses Union (BNU) is not at an impasse.

At the top of their list are the contentious shift and shift premium system.

“The imposition that this makes on the public purse is huge and we now have to work together in the interest of finding some common ground, as to how we can control this runaway expenditure,” Dr. Sands shared.

Seven-hundred and fifty thousand dollars is the price tag that the government has been billed, on a monthly basis, to cover overtime pay for nurses in the public system; according to Dr. Sands.

To this end, the PHA sought to introduce a new shift and shift premium system last year, Dr. Sands said.

However, to date, there has been no significant progress as the nurses’ union has roundly rejected the proposal.

Nurses initially threatened strike action in response to the new four days on four days off shift system which offered a shift premium of one dollar per hour.

Nurses suggested anywhere between six to 10 dollars per hour as considerable remuneration for their time, Amancha Williams, President, BNU explained.

PHA returned to the negotiation table with a new offer of a $1.75 shift premium.

Williams said nurses found the counter offer as a slap in the face.

“Canada and the UK both have pay scales. We have the lowest. This cannot be right.”

PHA, via a press statement Tuesday, indicated that they are open to negotiating with the BNU and remains hopeful that common ground will be achieved.

“The Public Hospitals Authority today confirmed its willingness to re-engage the Bahamas Nurses Union in discussions regarding a standardized shift system for nurses in its employ,” the statement said.

“Late last year the PHA announced that it would defer its original implementation date of December 10th, 2018.

“While no new implementation date was given, the Authority maintained that it was open to further discussions with the BNU in an effort to arrive at a compromise regarding the amount of compensation proposed via a shift premium, recognizing that the Authority has limited financial resources to support this initiative.”

No timeline was given yesterday on when negotiations on the contentious shift system and premium will be finalized.

In the meantime, Dr. Sands said his ministry is working on retention, recruitment and improvement on working conditions for nurses.

“Changing out the beds at the hospital is a major issue because of the problems with movement, back injuries and such. Looking at safety and other issues like long wait times when nurses are trying to clock in; we are working to add at least 10 new clock-in stations to make that process a little easier,” he shared.