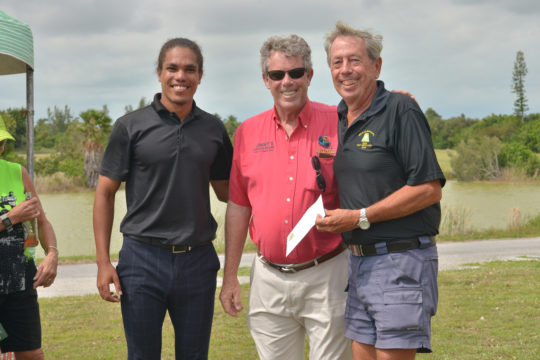 Based on a two ball scramble, the 9th Annual Grand Bahama Sands Golf Tournament had 72 male and female players enter on Sunday’s shotgun start. As an avid golfer himself, Bahamian Brewery CEO Jimmy Sands, was in attendance for the event and gave out prizes as well as announcing a new feature to the event. Pictured (left to right) are Marcus Gouthro, CEO Sands, and Allan Gardner, who won 1st net - 54.6. (PHOTOS: DEREK CARROLL FOR BAREFOOT MARKETING)

FREEPORT, BAHAMAS – As spring approaches, so do the hot days of The Bahamian sun, but thankfully The Bahamian Brewery and Beverage Company was able to enjoy a breezy and not too warm, Sunday on the greens for their 9th Annual Sands Beer Golf Tournament in Grand Bahama.

Joining forces with The Fortune Hills Golf Association the annual tournament was held on lucky St. Patrick’s Day, with lots of beer to go around. “It was good to see such a well-attended tournament on Sunday,” noted Nigel Kirkby, a local player who also won longest drive. “The Reef Course is looking really good right now and the Sands set-up was excellent, as was the meal; and of course the cold beer!”

Based on a two ball scramble, the near-capacity event had 72 male and female players, who started on the shotgun with handicap team selection by blind draw to mix high and low handicaps.  As an avid golfer himself, Bahamian Brewery CEO Jimmy Sands, was in attendance for the event and gave out prizes as well as announcing a new feature to the event.

“I’d like to thank Robbie Butler and Peter Collins for their work in organizing this event,” noted the Sands CEO. “We started this tournament hoping to add another challenge to the snowbird golf season here in Freeport, the brewery’s home –  and it’s really taken off. This year we increased fees so that we can give back, profits after expenses will go to help the Grand Bahama Home for the Aged. I’m so pleased to see a full field of players and some good friends.”

The tournament kicked off at 9:00 a.m. and ended at 1:00 p.m. for lunch and awards. This year’s winners received cash prizes and every player also took home a case of ’66 steps’ BBB’s latest beer as a personal gift from the CEO, known as ‘Jimmy’.  Results of the day were announced with the men’s awards going to first net – Marcus Gouthro/Allan Gardner (54.6); second net – Martin Brent/Otto Fountain (54.9); low gross, Allison Stuart/Elvis Butler (71), longest drive – Nigel Kirkby and closest to pin, Wayne Boyd. The lady’s awards went to: Low Net – Mireille Lods/Sue Urban (56.2), Low Gross – Kyndall Campbell/Joyce Harrison (78) with Longest Drive going to- Cheryl Triland and closest to the pin, Kyndall Campbell also the youngest competitor in the tournament.

The one-day event has now become an annual staple in the golfing community in Freeport. “Jimmy and the Brewery are longtime supporters of the Fortune Hills Golf Association,” noted Collins.  “The Association thanks him, his staff, the Reef team, the players, and of course the brewmaster for making this St. Patrick’s day a great one with lots of Sands beer on hand!”