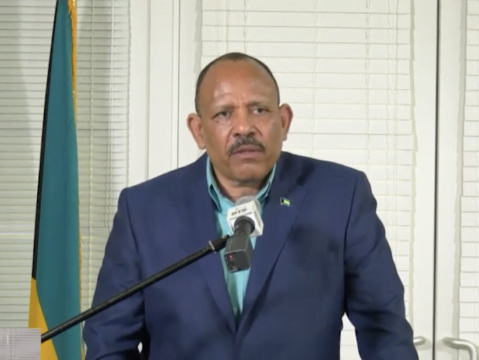 “I took an oath, I stand by that oath” says minister

NASSAU, BAHAMAS — Amid controversy about two Americans, who are residents of The Bahamas, being allowed to land in New Providence on Wednesday, Minister of Health Dr Duane Sands said yesterday he made the decision to allow them entry as part his oath to protect Bahamians in the face of the coronavirus pandemic.

The pair were granted permission to drop off a private donation of 2,500 diagnostic COVID-19 tests and swabs; supplies considered a “matter of urgency”, according to Sands.

However, the minister said a last minute an unexpected request was made for the donors traveling on the private plane to disembark.

“The plane was here and we had to make an urgent decision,” he said.

“The plane was here to make a much-needed donation.

“I made the decision to allow the couple to disembark.”

As he pointed to the lack of availability, the confiscation of items and limitations on the supply chain of test kits, Sands stressed: “I took an oath. I stand by that oath and I will search the world over to get what we need. We have gotten more than 3,500 test kits and maybe 4,000 swabs basically through donations, relationships — even when we could not purchase them on the open market.”

According to the minister, the permanent residents did not display symptoms of the virus upon arrival; a nurse from the surveillance unit evaluated them; they were advised to self-quarantine for 14 days; and were tested Thursday.

He said the ministry was grateful for the donation, as it seeks to protect lives.

He also said increasing testing can help The Bahamas move to the next phase of reopening.

When pressed on why the Americans, whose COVID-19 status was unknown, were permitted to disembark, when Bahamians seeking to return to The Bahamas must be tested prior to arrival, Sands said notwithstanding the policies and procedures in place there will “always be exceptions”.

Prime Minister Dr Hubert Minnis announced Monday the government will facilitate the return of Bahamians abroad, namely in the United States, due to travel restrictions as a result of the virus.

Those returning will be tested for COVID-19 before being able to board the flight.

According to the prime minister, the returning Bahamians will be quarantined for 14-days in a secure, designated government facility, which will be guarded by defense force officers.

Asked whether there was a double standard or quid pro quo scenario — arrival for the donations — Sands said: “A decision was made on the spot based on the totality of the information.

“We would have recognized the value of the swabs that were provided to the government and the people of The Bahamas, and yes, I am sure that entered into the totality of the ultimate decision made.

“The decision was made on the spot. I take full responsibility for it.

“If we had to do it again, perhaps we may have done a few things slightly different, but the persons have been tested and we have been evolving in our approach to the isolation of COVID patients. And I suspect that evolution will continue.”

The minister was also asked if there were more passengers on the flight.

He said he understood there were two people, but if there was information to the contrary, it should be brought to authorities.

As to whether there was a flight plan detailing the passengers on board, Sands said he was sure one was filed, but that does not mean health authorities received that information.

He said the information was “very limited”.

“This is obviously something that we look at and we will adjust accordingly and make sure as we move forward, the protocols are more deliberate, more clear, so we avoid any similar challenges,” the minister said.

Sands said that he has a duty to make sure the government can test Bahamians and “I take that duty very seriously”.

He added: “We are in a very peculiar situation around the world with the ability to get the supplies that we need to protect healthcare workers and to test our people.”

“If you don’t let us stay in the Bahamas, we’re going to take the test kits back”. Apparently that was what happened, otherwise there is no worthy justification.

“The residents did not display symptoms of the virus.” What in the world does that mean? All that preaching he did on super spreaders, apparently applies to the us and not to him. All i see is bribery.

Unbelievable. Calling for all rich Bahamians and Residents to buy some testing kits and come home. Bring all your family and friends. I’m being sarcastic.
Blackmail. Corruption. Law breakers. Showing your true colors. SO SAD.

We needed the test kits so can’t exactly blame em. We’ll have to see what happens to those of us stuck abroad when the PM clarifies what the plan is.

There is airfreight right? If it was just a matter of generosity…. The kits should have been shipped or airfreight via other means…. They didn’t have to be personally brought….the INTENT was clear now & more importantly PRIOR too. Yes we can all weight in because we’re out here and not on the inside…. Seem like the boo boo has been realized just hope that all has learned from it.

Lol why get mad. He should have just made them pay for a “service”
Think about it my fickle minded, scared, ignorant Bahamians. If they want to come to the Bahamas and stay then they should be offered a “care” package. Have them examined by experts and quarantined on arrival for the appropriate amount of days. If seen that they show no symptoms and test negative they should be allowed to stay. Charge them 1
million per person ( it sounds big like a big number to you because you never had it but trust me there are many that do) Then charge them for housing and biweekly checkups. and there you go the country made money and our people are able to make income. We have to use our brains and not just panic with fear. But I have come to expect these kinds of reactions from my people. Could only make jokes with y’all.

You, guys, are cruel. Not all non Bahamians who go there are loaded. Some have family members there, and now are separated from them in such devastating times. It is causing much pain to some people to be isolated and separated. These comments are cruel. Charge a million dollars? Who are you to decide how much money someone should be able to give even if they are billionaires. If a big hurricane hits the Bahamas, I’m sure, people from other counties will gladly embrace your troubles with open arms. It’s not about who is from where. If a person is healthy and can quarantine, why can’t they come ?
Be kind, people.
PS no one is gonna give a million dollars to come. They can take that elsewhere and just wait till they can enter without paying anything. Be smart.

As far as I have heard, these were not tourists, they were Bahamian Residents with a home in the Bahamas. And they were examined by a nurse here for symptoms and are staying in quarantine. We needed those medical supplies, I think he made the best decision.