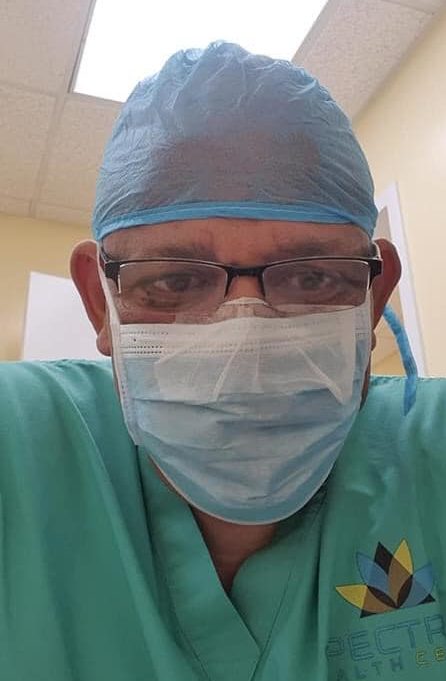 Former Minister of Health Dr Duane Sands posted a photo to his Facebook page on Tuesday, May 26, 2020, signaling his return to the hospital.

Speaker of the House of Assembly read a letter from Sands dated May 27, disclosing his interest in a PHA contract and the PHA’s offer of terms.

Sands resigned as minister of health earlier this month after accepting responsibility for the decision to allow six a group of permanent residents carrying medical supplies to enter the country during the border closure.

“I have returned to my profession as a cardiac, vascular and thoracic surgeon even as I carry out my duties as an elected member of Parliament for the Elizabeth constituency,” read the letter.

“As it is my intention to ensure that all Bahamians (public and private) have access to specialist surgical services, I have applied for re-engagement as a consultant surgeon in the PHA/Ministry of Health.

“The attached offer from the Public Hospitals Authority outlines the terms of my anticipated role expected to begin (May 27, 2020).

“As a member of the Governing party, this letter serves as a request to seek the concurrence of the Parliament (by way of a resolution) at a convenient time on the agenda. I shall be grateful if you will bring this matter to the attention of the members of this Honourable House.”

Article 49 (1) (f) of the constitution provides that every member of the House of Assembly shall vacate his or her seat in the House if the member becomes interested in any government contract.

Bamboo Town MP Renward Wells, leader of government business in the House of Assembly, moved a motion to vote on whether to exempt the Elizabeth MP.

The decision was unanimous.

Sands abstained from the vote.