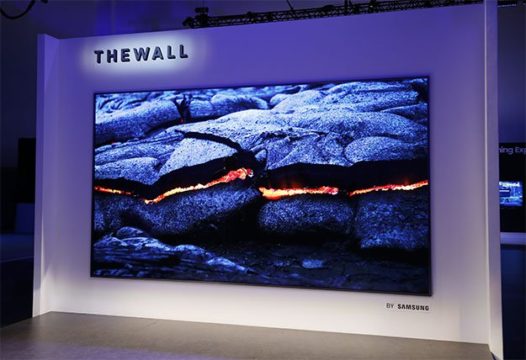 Get ready for 'The Wall'!

Samsung has announced a giant 146in (396cm) TV called The Wall at the CES tech show in Las Vegas.

The TV features a micro-LED display, which is pitched as a superior alternative to OLED because it offers both deep blacks and bright highlights.

However, one analyst said they would likely be very expensive to manufacture.

Samsung also says its modular technology will allow for TVs of customized sizes to be ordered.

This is because the display is actually composed of many smaller modules that can be arranged to form unusual dimensions – one example that was squat and super-wide was briefly shown at the presentation.

The micro-LED display, thanks to its self-emitting LEDs, should allow for a bright picture without the need for a backlight.

Backlights normally make it hard to produce deep blacks on screen because their illumination spills beyond the pixels they are targeted at.

Sony tried to produce TVs made from the same basic technology back in 2012 but they proved too expensive to make en masse.

Samsung’s decision to bet on micro-LED puts it in direct competition with rivals that have opted to go with OLED displays.

Micro-LED screens are difficult to manufacture because the LEDs need to be individually placed onto a layer by machines, explained analyst Paul Gray at IHS Technology.

“You have millions for a single display,” he said.

“But maybe Samsung has made some breakthroughs on multiple placement [at once].”

Mr. Gray added that, although Samsung was pitching the technology as a “consumer” product, it would likely only appear in very expensive devices.

Samsung has not yet revealed details on pricing itself.