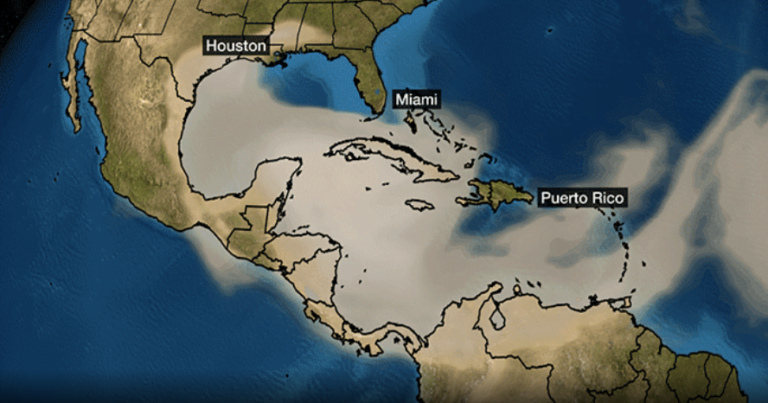 NASSAU, BAHAMAS — Residents with allergies and or respiratory illnesses are being advised to take necessary precautions, inclusive of taking medication, as The Bahamas braces for a concentrated expanse of Saharan dust haze.

Some of the dust, known as the Saharan Air Layer (SAL), is expected to move over the southern and central Bahamas today and tomorrow, and some of the northern islands, including New Providence on Wednesday.

The SAL commonly forms from late spring through early fall.

The current plume originated off western Africa and has travelled over 3,000 miles from the Atlantic Ocean to the Caribbean Sea.

Numerous Caribbean countries have warned their residents to take similar health precautions as the dense plume made its way across the Atlantic Ocean and into the region.

The Bahamas Department of Meteorology is expected to issue an advisory today.

In an interview with Eyewitness News, Chief Climatological Officer Michael Stubbs said: “Between now and Wednesday, we should be experiencing quite a bit of it in the upper atmosphere.

“This is not uncommon. Almost every year, around this time, we will see this kind of occurrence: that is Saharan dust coming over from the Saharan area and the west coast of Africa and it is actually airborne, and caught up in the trade winds, and it brings it this way.

“Trade winds blow from east to west across The Bahamas,” he said.

“In fact, it is the same path that the cyclones take actually when they develop off the coast of Africa.

“So, like many other countries we are asking persons who are prone to allergies, particularly where upper respiratory allergies to be cognizant and make sure to take the necessary actions and to prevent this becoming a problem for them by perhaps continuing to wear the mask like we do for COVID and also to perhaps to anticipate using the allergy prescribed medicine in advance of this.”

According to Stubbs, the dust participles in combination with high pressure could help to absorb more moisture in the atmosphere, which could suppress the formation of tropical cyclones and thunderstorms.

The dust haze could lead to a sore throat, itchy or watery eyes, sneezing, a runny and/or a dry cough.

Due to the ongoing COVID-19 pandemic and a heightened climate of awareness of symptoms suggestive of the virus, the health impacts of the dust could be misinterpreted.

The plume of dust was expected to impact St Maarten on Saturday and Jamaica today.

Both countries have issued advisories.

Meteorology Offices in other countries, including St Vincent and the Grenadines, and Trinidad and Tobago have issued similar warnings, encouraging vulnerable groups to take precautions.

The storm is already in Mayagauna and Inagua.

I live Grand Bahama I en see nun yet