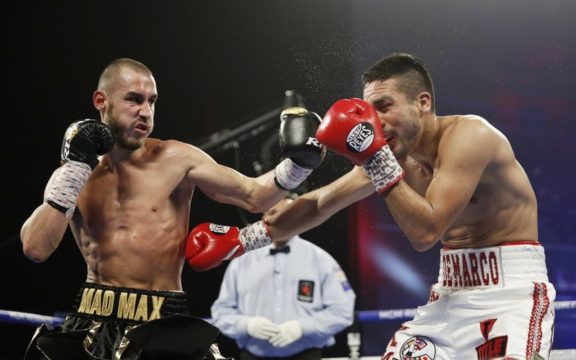 In this Oct. 20, 2018, file photo, Maxim Dadashev, of Russia, left, hits Antonio DeMarco, of Mexico, during a junior welterweight bout in Las Vegas. Maxim Dadashev has died after suffering a brain injury in a fight in Maryland. He was 28. The Russian Boxing Federation said Tuesday, July 23, 2019, that Dadashev died "as a result of the injuries he sustained" in Friday's, July 19, 2019, light-welterweight fight with Subriel Matias at the Theater at MGM National Harbor in Oxon Hill, Maryland. (AP Photo/John Locher, File)

MOSCOW (AP) — Boxer Maxim Dadashev died Tuesday, four days after suffering a brain injury in a fight in Maryland. He was 28.

The Russian Boxing Federation said Dadashev suffered a brain swelling in Friday’s light-welterweight fight with Subriel Matias at the Theater at MGM National Harbor in Oxon Hill, Maryland. He underwent surgery but his heart stopped Tuesday, the federation said.

Dadashev was hospitalized at UM Prince George’s Hospital Center shortly after the fight, which was stopped by his corner following the 11th round after Dadashev took numerous shots to the head.

Footage from the fight shows Dadashev shaking his head in his corner as his trainer, Buddy McGirt, pleads with him to stop the fight, telling him: “You’re getting hit too much, Max. Please, Max, please let me do this.”

Shortly after, the referee stopped the bout at McGirt’s request.

The Russian Boxing Federation’s secretary general, Umar Kremlev, said the federation would investigate whether anyone was at fault for Dadashev’s death.

“We need to know the truth about what happened,” Kremlev wrote in an email to The Associated Press. “I believe that some human factors intervened, that there was some kind of violation.”

He added the federation would give Dadashev’s family financial support.

Both fighters were 13-0 before the bout, which offered the winner the right to challenge IBF titleholder Josh Taylor. Dadashev had been viewed as a rising star after beating two former world lightweight champions, Darleys Perez and Antonio DeMarco, last year. Before Friday’s fight, he had won 11 of his 13 fights by way of knockout.

In a statement, promotor Top Bank called Dadashev “a talented fighter inside the ring and a loving husband and father outside the ropes.”

He was originally from the Russian city of St. Petersburg but had fought exclusively in the United States since turning pro in 2016.

“He was a very kind person who fought until the very end,” Dadashev’s wife, Elizaveta Apushkina, said in a statement issued by the hospital. “Our son will continue (to) be raised to be a great man like his father. Lastly, I would like to thank everyone that cared for Maxim during his final days.”

The Russian embassy in the U.S. said in a statement on Facebook it is “ready to provide any necessary assistance for (Dadashev’s) repatriation to Russia.”