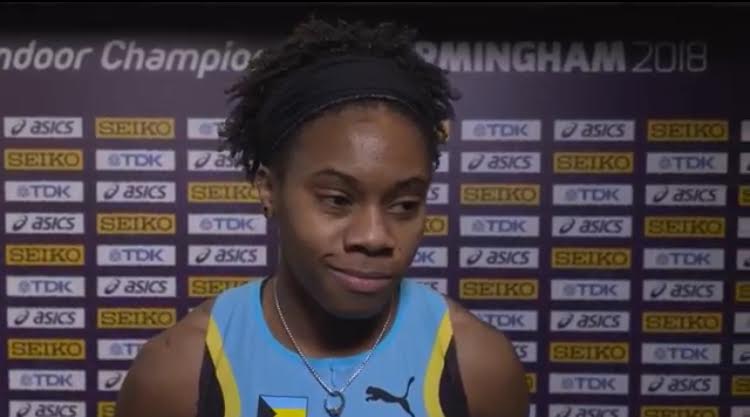 Devynne Charlton following the opening round of the 60m hurdles.

After a pair of disappointing yesterday finishes from Jamal Wilson and Donald Thomas in the men’s high jump, Alonzo Russell was disqualified in the men’s 400 meters (m).

Russell appeared to finish third overall in the heat, however, the results were quickly called back. For the first time ever at a major international meet, all of the athletes in the race were disqualified for various lane violations. According to IAAF officials, every athlete that competed ran outside of their assigned lane. As a result, none were eligible to qualify, and the spots in the semifinal were given to the fastest losers of the other heats.

Fortunately for team Bahamas, Devynne Charlton came up big in the women’s 60m dash later in the day. Charlton won her heat in a season’s best 7.95 seconds and qualified to compete in today’s semifinal.

“I thought it was a good race. It was a fast race, but I was able to get through pretty easily,” Charlton said. “What’s good is I wasn’t exhausted after the race was done. I know I’ll be able to get faster and the competition gets tougher.”

Along with Charlton, Warren Fraser will also be in action in the men’s 60m dash.