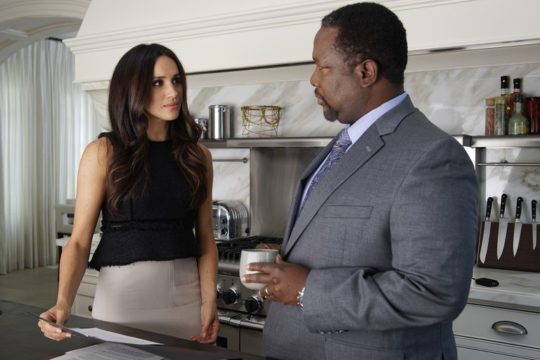 With her May 19 wedding to Prince Harry now less than a month away, it will soon be all-Meghan-all-the-time, and CBS gets the ball rolling with “Meghan Markle: American Princess,” airing Friday at 10 p.m.

Prior to the wedding service, to be broadcast live from St. George’s Chapel at Windsor Castle, and the post-ceremony parade, the one-hour special anchored by “CBS This Morning” co-host Gayle King, explores the relationship between Prince Harry and Markle, who is “divorced, an actress and bi-racial,” and definitely “bucking tradition at Buckingham Palace.”

Rachel Meghan Markle was born in Los Angeles on Aug. 4, 1981, to Doria Radlan who is African American, and Thomas Markle, who is Caucasian and was the director of photography on the sitcom “Married with Children” (1986). She attended Northwestern University, where she majored in theater and international relations, and after graduating, she worked for the U.S. Embassy in Buenos Aires, Argentina.

As an actress, Markle has appeared in the feature films “Remember Me” and “Horrible Bosses,” but is best known for her role as Rachel Zane on the USA Network series “Suits,” which she played from 2011 to 2018.

CBS states that Markle’s story, from being a child activist to being an international star, is told through those who know her best — friends, co-workers and more. Among those featured is photographer Alexi Lubormirski, who talks about bonding with the couple over their shared passion for humanitarian work while shooting their official engagement portrait. Markle’s sorority sisters weigh in on what she was like in college and beyond. “We were Meghan’s sorority sisters!” four young ladies gleefully proclaim in the trailer.

Markle’s former teachers explain how she was showing “multidimensional flourishes” as a child. Viewers will learn what makes Markle stand out and the path she took to become half of an international power couple for a new era.

Respected actor Wendell Pierce, who played Markle’s father, Robert Zane, on “Suits,” opens up about how the cast learned she was dating Prince Harry.

According to ET Online, back in November, when Markle and Prince Harry announced their engagement, Pierce tweeted a sweet message for his former co-star, who announced she was leaving the series that same month.

“Congratulations to my TV daughter Meghan Markle and Prince Harry on the news of their wedding engagement,” Pierce said. “Harry, you have her TV Father’s blessing. Robert Zane approves.”

As the networks prepare for the global telecast of the ceremony, which will begin at 7 a.m., “Meghan Markle: American Princess” observes that “People who know her best know why a blind date was all it took.”