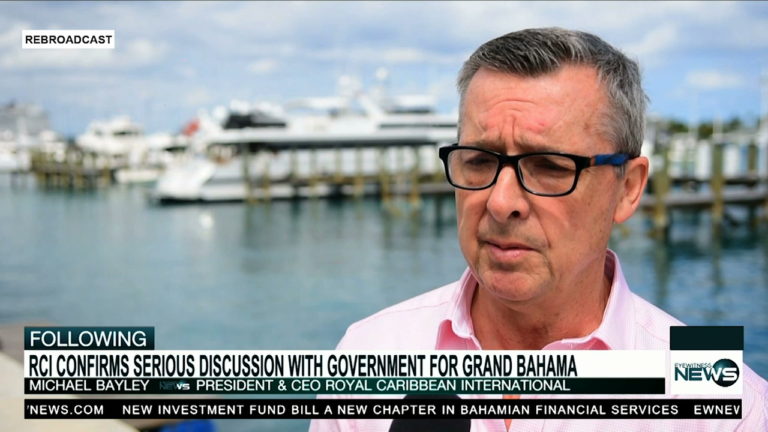 NASSAU, BAHAMAS – Royal Caribbean Cruise Lines (RCCL) President and CEO Michael Bayley said yesterday that the company, and its partners, are approximately at the halfway point of finalizing a proposal to the government for the acquisition of the Grand Lucayan Resort.

RCCL and Mexican port developer, ITM Group, partnered in a bid to acquire the Grand Lucayan in addition to developing a water-based theme park around the resort and the Freeport Harbour.

Responding to questions from Eyewitness News about the company’s total investment in The Bahamas to date, Bayley said, “I had an interesting conversation with a colleague about five minutes ago.

“I think, and I am just throwing out this number, but probably close to over $600-700 million investment to date, and of course we are now working with another group of investors on the Freeport development project for the Grand Lucayan and the port itself.

“We are about halfway through that process of envisioning and working with the Bahamian government in terms of a proposal that we think will be really exciting in terms of the future of that whole resort area.

Speaking to the long-term plans to revitalize the resort and Grand Bahama’s economy, the Bayley said, “We typically take a long-term perspective.

“The Bahamas has always been the number destination.

“We see that as continuing to grow.

“We think that with what’s going on with the Nassau port development, that’s going to be exciting with Perfect Day, Coco Cay.

“We think that the development in Freeport, it’s really going to be an exciting resurgence in terms of tourism into [the] Freeport area.

“We think that we can really bring that whole destination to life and it’s going to become yet another attractive destination within The Bahamas.

“We look five, 10, 15 years into the future and we try to project what we think it is going occur with the volume of tourists and we are pretty confident we’ll be bringing millions more to The Bahamas over the coming years.”

The government purchased the resort for $65 million, with $30 million paid up front.

The Lighthouse Pointe is the only property of the three brands which reopened after the resort close its doors following Hurricane Matthew in October 2016.

According to Bayley, Royal Caribbean, its partners and other cruise lines have an advantage due to their “massive distribution in the key markets”.

“Over 15 per cent of those guests come the U.S. market.

“We have a massive distribution system; very strong brand awareness; great trust from the consumer; [and] we’re very big in Europe, Latin America, Asia, [and] Pacific.”

“The key really to this is if you’ve got a great product, you’ve got to figure out how to distribute it.

“We have a global structure of distribution that will allow us to take this product and sell it through our distribution system.

“We’re pretty confident that we are going to generate a lot of demand for Grand Bahama.”