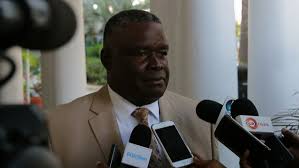 NASSAU, BAHAMAS – Minister of Public Service Brensil Rolle confirmed earlier this week that the government is now enforcing the long-standing rule that civil servants must take all of their accrued vacation days, despite the opposition and others believing that the move is politically motivated or is an avenue to push persons toward early retirement.

“Individuals are to take their vacation because the government made the decision a few years ago that they would not pay for vacation leave. So, if you accumulate the vacation, we have simply asked that you take the days,” Rolle told the media on the sidelines of an IDB signing for two loans on Monday.

Most recently, several senior members of the Royal Bahamas Police and Defence Forces, as well as other high-ranking government officials, were asked to immediately take their accumulated vacation leave.

The move sparked outrage amongst many, especially the Opposition Progressive Liberal Party, who claimed that these persons were being victimized because of their political affiliation.

Rolle advised, however, that this is not the case.

“A few officers were retired or asked to take their vacation from the Police and Defence Force, but I am not aware of any such mass retiring’s,” Rolle said.

He also assured that moving forward, it is government’s aim to prepare younger Bahamians to fill vacant roles.

He also assured that essential services in the public sector will not experience a deficit.

“There is no need to have bottlenecks at the top of the service if there are capable individuals who can fill those bottlenecks,” Rolle said.

The public service minister said despite recent discussions about disengaged retirees and contracted workers; he believes that the public service has wonderful officers who strive daily to deliver stellar services.