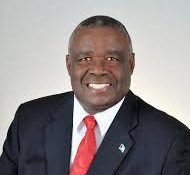 Minister with responsibility of the National Insurance Board (NIB) Brensil Rolle, described the quasi-government social security operation as essentially a mess, pointing to a myriad of challenges he met in place since assuming the office in May.

Rolle said as the national fund continues to decrease annually, the Board has regressed with “all types of issues.”

In his contribution to the mid-year budget Monday afternoon, Rolle said the contributions to the fund will have to be increased to shore up financial resources.

“Despite the call by the actuaries for the past 11 years, for increases in contributions, a decision has to be made … We can’t continue this downward spiral in our social security support system,” Rolle said.

In addition to the obvious financial straits NIB has faced over the last decade, the minister went on to discuss other issues that impact operations, including a new V3 IAS system, which allows both insured persons and employers, to interact with NIB online through two self-service portals.

“Many mistakes were made with the new system,” Rolle said. “It was poorly managed and project management did not do the drive testing and needed quality controls.”

Rolle added that the system only had a 12-month warranty and many of the issues were not worked out until after the warranty expired.

Every six months, retirees are required to undergo the verification process in which the beneficiary has to appear in person at NIB to confirm their eligibility, however. Another feature of the new system allows retirees to verify online, at least once during every 12-month period.

That also has its challenges, the minister said.

Rolle said it was expected that employers would be able to conduct a large majority of their routine business with NIB through the portal, which would include online submission of contribution payments, automated update to contribution submissions to add new and delete old employees, and payment of contributions by credit card.

Through the system employers were also expected to be able to request a Letter of Good Standing, check their payment status and review their payment history.

Even as hundreds of “bugs” have been identified in the new system, Rolle said the challenges persist.