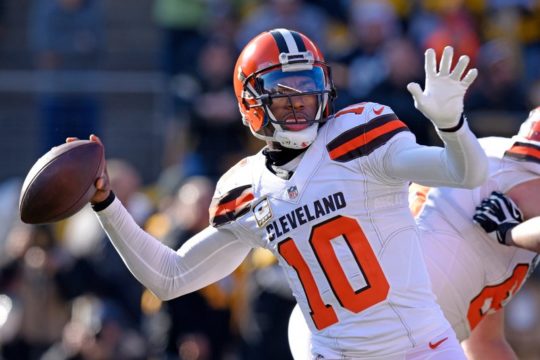 OWINGS MILLS, Md. (AP) — Robert Griffin III is poised to resume his NFL career about 35 miles away from where he started it.

The former Washington Redskins quarterback has reached agreement on a 1-year contract with the Baltimore Ravens, who love the idea of having the 2011 Heisman Trophy winner backing up 10-year starter Joe Flacco.

“Obviously, his personality, he’s a confident guy. He’s a very talented quarterback,” coach John Harbaugh said of Griffin on Wednesday. “He’s had a lot of success in this league early on. We’re excited about it. We felt like we needed a No. 2 quarterback.”

Griffin’s last previous stop in an injury-riddled career came in 2016 with the Cleveland Browns. He started five games, winning only one of them.

General manager Ozzie Newsome said Griffin, 28, didn’t have far to travel before showing the Ravens he can still fling the ball.

“He still lives in the D.C./Virginia area,” Newsome said. “We were bringing in some receivers and we asked him if he would come in and throw and go through a full workout for us. He took a physical. He did all of that. After that, he went to visit another team. We just were able to come to an agreement.”

The terms were finalized late Tuesday night, and Newsome expects RG3 to sign the contract next week.

Griffin won the Heisman Trophy with Baylor before being selected second overall in the 2012 draft by the Redskins. He enjoyed a sensational rookie season, throwing 20 touchdown passes and only five interceptions, but his career took a decisive downturn after he tore knee ligaments in a playoff loss to Seattle.

RG3 returned in 2013 but was benched after throwing 16 TD passes and 13 interceptions. The following season, a dislocated ankle limited his effectiveness.

Griffin missed the 2015 season after sustaining a concussion during the preseason. After being released by Washington, he signed with the Browns in 2016.

He started the opener, sustained a shoulder injury and was put in injured reserve the following Monday. Griffin returned to play the final four games and was the starting quarterback the last time the Browns won, against San Diego on Dec. 24, 2016.

This article was written by DAVID GINSBURG Associated Press writer.