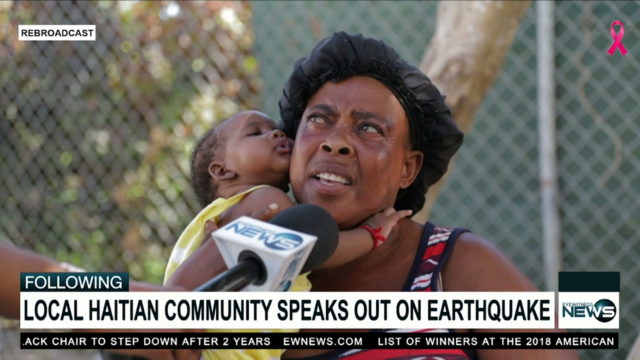 Following the 5.9 magnitude earthquake that hit Haiti on October 6, the Rights Bahamas group on Wednesday strongly condemned the Bahamas government for what they termed its  “heartless” refusal to help Haiti.

The group accused the Minnis administration of using the tragedy to advance its own campaign to ethnically cleanse the country of people of Haitian ethnicity.

Stephanie St. Fleur, president of Rights Bahamas denounced Prime Minister Dr. Hubert Minnis’ use of the earthquake, “to encourage fear, xenophobia and ethnic hatred by claiming that escaped criminals from Haiti may be on the way to Bahamian shores.”

St. Fleur claimed that Minnis’ simultaneous announcement of yet another Immigration crackdown – exercises which disproportionately target those born in The Bahamas to Haitian parents, who are citizens in waiting – proves that the government is still intent on cleansing the Bahamas of Haitian ethnicity.

“How can our prime minister be so heartless in the face of a natural disaster that is affecting our neighbours in Haiti?” St. Fleur asked in an issued statement.

“How can he be so hypocritical? Do we not rely on international aid and charitable donations in our times of need; for example, when hurricanes ravage our communities? Are we not called upon as Christians to pay such charity forward?

“When the prime minister speaks publicly about international issues, he is speaking on behalf of the Bahamian people. He is telling the world that our Christian values and our humanitarian standards are very selective, even discriminatory. His tearful concern for Dominica following a recent hurricane was the complete opposite of his near total disregard for the suffering of the people of Haiti following last week’s earthquake.

“Why do the people of one Caribbean nation struck by tragedy deserve our concern, but not the people of another? It is, quite clearly, simply because they are Haitians and because our FNM government has chosen to continue in the discriminatory, xenophobic spirit of their predecessors.”

St. Fleur went on to state that she is personally very disappointed in the prime minister, whom she campaigned for in the 2016 general election.

“I openly supported Dr. Minnis and his party which I campaigned hard for, especially among Haitian-Bahamians,” she said. “While I agree that the prime minister should focus on The Bahamas and Bahamians, but he is also being selective here.

“By using the earthquake to announce another crackdown by the Department of Immigration, he is putting thousands of Bahamians of Haitian descent and Bahamas-born citizens in waiting in fear for their safety. Bahamians of Haitian ethnicity are Bahamians too – and a prime minister who claims to embody ‘the people’s time’ must act in the interests of all his people.”

Rights Bahamas vice president Joseph Darville also criticised the comments of Immigration Minister Brent Symonette, who supported the prime minister in his decision not to send aid to Haiti.

Earlier this week Symonette told the media that there will be an increase in the normal border control following Saturday’s earthquake in Haiti, including the Defence Force’s Air wing, Immigration and the Police.

When Haiti suffered an earthquake in 2010, The Bahamas had relaxed its border control and assisted Haiti where necessary. However, Symonette said this latest earthquake was nowhere near as serious.

“That [2010 quake] was a particularly strong earthquake that left thousands of people homeless, dead and caused damage to the infrastructure,” said Symonette earlier this week. “This was not of that magnitude.”

Given the Prime Minister’s strong stance on immigration, Symonette said he does not predict that this position will change, but it will be discussed at Cabinet for a formal position to be made.

“How can there be no consideration of assistance for our brothers and sisters in Haiti? It pained me to my soul to hear the callousness and disregard in the minister’s voice – I could not believe that it came out of the mouth of one of our Cabinet members.

“No matter what the level of catastrophe in our sister nation, we should be more sympathetic as a country. Does the minister not know that a general estimate would place at least 30 per cent of our population as having Haitian heritage and therefore family members in Haiti?

“In 2010, when another earthquake struck Haiti, we showed the very best version of ourselves as a nation. Still, in the throes of the global economic crisis, we nevertheless lived up to our neighbourly responsibility, thanks to a visionary and compassionate leader in Hubert Ingraham. From what has happened over the last few days, we can now see how far the FNM has fallen from that lofty standard of years gone by.”

Opposition leader Philip Brave Davis said the Prime Minister’s decision not to help Haiti is insensitive and is not a good move as the Bahamas is a member of the CARICOM community.

Meanwhile, some residents living in a Haitian shanty town on Wednesday expressed that they are not offended by the government’s decision.

Mary Pierre, who spoke to Eyewitness News using a translator, said the decision was probably made with good reason.

“She doesn’t have a problem with it because the first time they helped, but this time if they don’t help then it’s probably for a reason,” Pierre said.

The Haitian native said she received news that one of the dozens who was found dead after Saturday’s quake was her cousin. She also produced a picture of his lifeless body which was discovered in the rubble.

“She said her High Blood pressure went up when she found out, and today she’s not feeling too good,” said the relative who translated Pierre’s Creole to English.

As for her son, who is back home Haiti, Pierre said she was able to speak to him via text message shortly after the earthquake took place.

When asked if Pierre wished to go back home, her translator said, “She would like to go, but right now she can’t assist anyone because she doesn’t have the funds to do so.”

Apryl Sands contributed to this report.