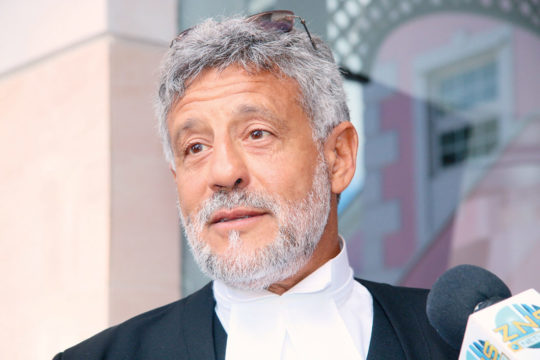 Minister of Labour Dion Foulkes on Monday announced an extended deadline of August 10 for all shanty town residents to vacate the premises.

In a statement released by the human rights advocacy group, Smith highlighted the Labour Minister’s remarks concerning the new deadline and the supposed consultation of Rights Bahamas on this new time limit.

“It has come to our attention that Minister of Labor Dion Foulkes told the media that he consulted with Rights Bahamas regarding the government’s reprehensible and illegal move to force people from their homes,” the statement read.

“If the Minister intended this to give the impression that Rights Bahamas approves of this government’s campaign of rank discrimination against and abuse of persons of a certain ethnic background, or that provided any input whatsoever into this government’s vile plan, this is disingenuous in the extreme.”

According to Smith, there had been no consultation, other than him repeatedly warning the minister that arbitrarily forcing people from their homes is unconstitutional and morally disgraceful.

“These warnings have fallen on ‘deaf ears’ and in general, there has been no willingness on the part of government to collaborate with human rights defenders in solving the various social problems existing in organic communities,” it continued.

“Mr. Foulkes would do well to acquaint himself with what real consultation looks like.”

“For the record, so there is no confusion, Rights Bahamas forcefully and utterly condemns the government’s effort to ‘cleanse’ the land of certain human beings, and remains committed to taking strong legal action if the FNM insists in proceeding on its current course,” Smith confirmed.

However, Foulkes defended the logic behind the new deadline earlier this week.

“The reason why we extended the deadline was to ensure that if any legal matters arise, we have made certain that we gave all residents ample time – as required by law – to vacate and relocate,” Foulkes said.

Some families in these shanty town communities – Golden Isles and Bacardi Road, have joined forces to launch legal action against the shut down and are represented by Smith.

Fifty families are expected to move forward with filing the class action suit before next week.