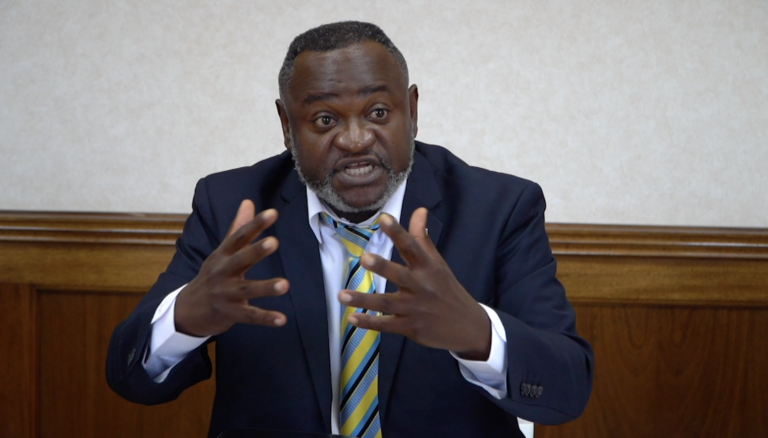 NASSAU, BAHAMAS — Ricardo Smith, leader of the newly formed Justice Labour Party (JLP), has called on the government to remove Speaker of the House of Assembly Halson Moultrie, saying his sentiments and conduct have been “deplorable” and not in keeping with the impartiality the chair requires.

Smith, a longtime Progressive Liberal Party (PLP) member who resigned from the party in September, announced the formation of the JLP and its intention to run a full slate of candidates with the exception of the Englerston constituency and its MP, Glenys Hanna-Martin.

“I’ve seen the conduct with the speaker of the House of Assembly, and it is deplorable and unacceptable, and it must be condemned on every front,” Smith said during a press conference to launch the JLP at the British Colonial Hilton.

“A speaker must remain impartial.

“He must appear to be impartial.

“The speaker appears now to be advocating or asking for things for himself.

“I am not saying that these are things he may not be entitled to, but it is improper for the speaker of the House to be engaging in such behavior and it is incumbent on the governing party to remove him forthwith.

“The government must remove him from the role of speaker.

“He has been deplorable from the beginning and for the young people who are coming up, I want them to also understand when you have a role, you must understand that role, and you should carry out that role in the manner in which it should be done.”

In October, Moultrie gave the government an ultimatum: address long-standing concerns over conditions at the Office of the Speaker or he would turn over the keys to the building.

Earlier this month, he turned over the keys to the chief clerk of the House and vowed to never return.

On Wednesday, Moultrie challenged the executive branch of government to answer questions and said he will turn his attention on the matter to deepen The Bahamas’ democracy.

The speaker has stressed the need for the separation of powers between the executive and legislative branch, stressing it is an “absolute mockery of democracy” to have the legislative branch treated as a “department of the Cabinet Office”.

Additionally, Moultrie has decried the government’s inaction on a draft resolution that would allow for hybrid parliamentary proceedings, including virtual Parliament, amid the COVID-19 pandemic.

Smith said it would be more appropriate for the former speaker or sitting backbenchers to advocate to advance certain positions on behalf of the chair and Parliament.

He said the speaker has begun to speak about the separation of powers in a “more political tone” than an academic one.

“It now almost appears as the speaker is no longer impartial, that he may be even now opposition,” he said.

“I don’t know and that is a kind of dangerous ground for any government.

“You have a speaker in that appears to be to some degree can frustrate the will of the government through its legislative agenda.”

Always a headline ahead, around the world, Bahamas, Bahamas news, ewnews, ewnews.com, www.ewnews.com