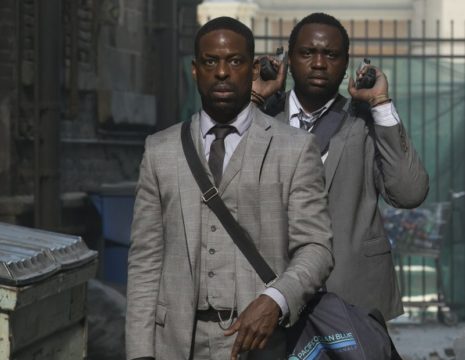 If you’re looking for a hotel in downtown Los Angeles, might we recommend one that probably will get mixed reviews on TripAdvisor? It has atrocious turn-down service and few amenities but the onsite medical care is startlingly good.

This is the Hotel Artemis, where wealthy and forward-thinking criminals come for first-rate therapeutic treatment if they’ve been badly shot or knifed or horribly mutilated. As long as they’re a fully paid up member, they’re welcome. (That’s right, you can check out any time you like, but you don’t have to really leave).

This premise, not unlike the one in “John Wick,” animates “Hotel Artemis,” a sci-fi thriller that offers us a look at what Jodie Foster might look like as a little old lady and what Sterling K. Brown can look like when he’s a studly, gun-slinging action hero and not perpetually unsure like he is on “This Is Us.”

Good as these two are, they can’t conceal the fact that writer and director Drew Pearce has made an uneven feature film directorial debut. He flaps around for a consistent tone, stunts some potential story lines and kicks out a bunch of cliches. Then, clearly unable to find a rational way to end his film, he adds two massive doses of nonsensical ultra-violence.

But, until then, the premise he’s spun is intriguing. Foster plays an alcoholic, shut-in, onetime trauma doctor who for the past 22 years has stitched up criminals in the heavily protected 12th floor penthouse of the Hotel Artemis. She goes by the simple name Nurse and, you guessed it, there’s tragedy in her past.

In exchange for top-notch medical care that includes nanotechnology, 3-D printed organs and microwave scalpels — my goodness, even bad guys have excellent health insurance — the criminals who come to the Artemis promise not to kill each other or be rude to the help. (For anyone who cares, Artemis was the Greek goddess who embodied the sportsman’s ideal.)

The film takes place over one summer night in 2028, where the streets are filled with rioters angered by water shortages. A pair of bank-robbing brothers (Brown and Brian Tyree Henry) knock on the door needing urgent care, a slinky assassin (Sofia Boutella) has arrived with a secret agenda and a smarmy arms dealer (Charlie Day) is recuperating.

Plus, the Wolfking, the most dangerous mobster in town, also wants in. (He’s another treat, since he’s played by the laconically unpredictable Jeff Goldblum, and Zachary Quinto has a super turn as his needy youngest son.) There’s also a cop bleeding outside the Artemis with a personal connection to Nurse, but allowing her inside for treatment would violate another hotel rule.

None of these characters will be the same after an eventful night, but they remain cartoony, except for Brown who manages real pathos and Foster, who shuffles about using small footsteps under lots of prosthetics. She does have some of the best lines, including “This is America, honey. Eighty-five percent of what I fix is bullet wounds.”

Other nice additions are the elegant costumes by Lisa Lovaas, who dresses Brown in a stylish three-piece suit and Boutella in a ravishing gown with plenty of slits. Fans of musician Father John Misty should keep their eyes peeled for him in a cameo. (He also offers the original song “Gilded Cage” for the soundtrack.)

But if a nice bed is what you’re after in Los Angeles and you’re not in need of lifesaving care, we suggest an early check out from this particular hotel.

“Hotel Artemis,” a Global Road Entertainment release, is rated R by the Motion Picture Association of America for “for violence and language throughout, some sexual references and brief drug use.” Running time: 93 minutes. One star out of four.

This article was written by MARK KENNEDY, Associated Press writer.