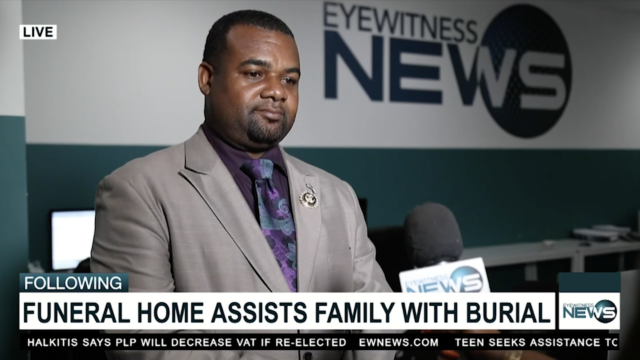 Funeral home spokesperson: “We just wanted them to have some closure”

NASSAU, BAHAMAS – Restview Memorial Mortuary & Crematorium, on Wednesday responded to the plea of 15-year-old Cecil Roberts, who called on the public earlier this week to donate funds so that he could bury his mother, the late Dianne Morgan.

Morgan was killed by a hit- and- run driver more than two months ago, and the family has been unable to cover the cost of her cremation.

“We heard their story and thought how can we assist this family in need. Given that we are already in the business, it just seemed like the right thing to do,” Fox said.

He explained that from day one, the funeral agreed to cover the cost of burial but was challenged to proceed with arrangements.

According to Fox, there was some difficulty verifying the nationally of the deceased as she only possessed a national insurance card.

“During the process, it was discovered that she only had a National Insurance card but there was no passport or birth certificate,” Fox claimed. “We had to go the Jamaican Embassy and work with officials there to get everything sorted out.”

He added that after weeks of back and forth with officials from various agencies, they were finally able to secure the body of the deceased and grant the wishes of the family for their loved one to have a final farewell.

“The family found themselves in a tough position,” Fox lamented. “The son is in school and the daughter lives on another island trying to work, so it has been extremely difficult for them.

“We just wanted them to have some closure.”

Acknowledging that many families face financial challenges and find themselves in a similar position, Fox said the company understands their plight and was happy to assist the teen to bury his mother.

Morgan was struck by a 22-year-old female driver who was later charged and fined $10,000.