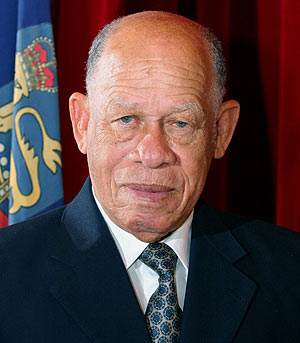 NASSAU, BAHAMAS — The nation mourned the passing of Arthur Dion Hanna yesterday, with condolences pouring in from every sector of society.

Hanna was a long-time politician who previously served as a member of Parliament, Cabinet minister and governor general. He is the father of current Englerston MP Glenys Hanna-Martin.

In a statement issued last night, Prime Minister Dr Hubert Minnis lamented the loss of a “Bahamian giant and statesman”.

“It is with deep regret and profound sadness that the country has learned of the passing of former Governor General the Honorable Arthur Dion Hanna, the seventh Bahamian governor general of the Commonwealth of The Bahamas, who served in that capacity from 2006 to 2012,” Minnis said.

“The Honorable AD Hanna was a fierce patriot. He loved his Bahamas with unrelenting devotion, courage and passion. He gave his life to the Bahamian people in the struggle for majority rule and independence. He helped to form the first majority rule government in 1967.

“Arthur Dion Hanna is a founding father of the modern Bahamas, who fought for equality and social justice throughout his long life. Many of our national institutions and progressive national policies bear the hallmarks of his advocacy for Bahamianization.

“Mr Hanna served in the Cabinet of The Bahamas for decades, including in the finance, education, home affairs and trade and industry portfolios. He was deputy prime minister for many years during successive administrations of Sir Lynden Pindling.”

Hanna, “a proud son of Pompey Bay, Acklins”, was born on March 7, 1928, and grew up to become an attorney. Upon completing law studies in the UK, he returned home to The Bahamas to join the Progressive Liberal Party (PLP), eventually serving as the party’s deputy leader for numerous years.

A “constitutional father”, Hanna served as an MP for 32 years, representing the Ann’s Town constituency, and served as government leader in the House of Assembly from 1967 to 1984.

Minnis noted: “He was predeceased by his wife Beryl Hanna, nee Church, who was similarly committed to the national development of The Bahamas.

“His legacy of service was passed on to his children, including his surviving children: Dion, Glenys and Dawn.

“Known affectionately as AD by generations of Bahamians, Mr Hanna was a man of tremendous humility who loved boating, fishing and farming.

“As a boy and then as a young man growing up, I well remember AD Hanna, especially his belief in the talents and gifts of Bahamians. He possessed a progressive soul and spirit.

“I remember him constantly fighting for opportunities for all Bahamians in every sector of society. This fight for opportunity continues.”

The prime minister said the nation is “grateful for his service and for his enduring example”, adding that he personally spoke with Hanna-Martin to extend condolences.

“On behalf of the Bahamian nation, people and government, and on my own behalf, and that of my wife, Patricia, I extend heartfelt condolences to his family, friends and colleagues on the passing of one of the political giants of the modern Bahamas, who will ever be recalled in the annals of Bahamian history,” Minnis said.