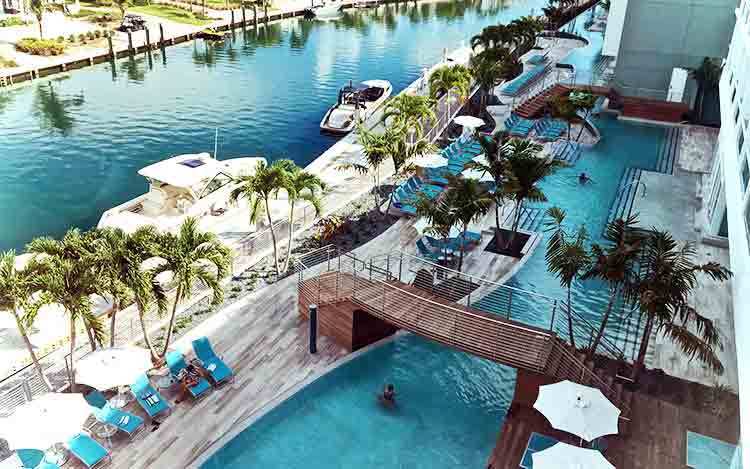 NASSAU, BAHAMAS — Resorts World Bimini has announced that its property will remain temporarily closed as the country continues to grapple with the local spread of the novel coronavirus.

In an announcement to its guests on its website, the resort said: “Like the other casinos in The Bahamas, we are taking the COVID-19 restriction very seriously and have determined that temporarily closing our property is the best way to address the Bahamian requirements and safety concerns.

“We will continue to closely monitor the situation and make changes based on safety considerations and local requirements.”

The Bimini resort had reopened in June after announcing its initial temporary closure in March during the first wave of COVID-19 cases.

However, the resort was shuttered on July 25 when cases began to spike once again.

The country remains in a state of emergency, with thousands of people still out of jobs or being assisted by government unemployment benefits.

Atlantis and Baha Mar have reportedly started re-engaging some of their employees, as they prepare for a December reopening.

However, some Resorts World Bimini employees, who spoke to Eyewitness News under the condition of anonymity, said they feel “abandoned by the company”.

Many of the resort’s employees remain furloughed and are receiving unemployment assistance from the government.

However, Eyewitness News was advised that those payments are sent to the island as checks and then distributed to the workers, oftentimes delayed, and dependent on the mailboat and the weather.

One employee said over the course of the pandemic, the company has not been as forthcoming as other local destinations with information about what is happening and the way forward for employees.

She said there has been little to no communication and workers are at a standstill.

She also noted that most employees have found out about the company’s decisions from social media or its website, with no previous communication from the resort.

“There’s no direct contact going on from managers, from HR, no emails, no text, no calls, anything to give us some sort of security for what to do,” the worker said.

“We are not sure if we should be looking for other jobs, trying to find other avenues, especially for the ones who live on the island of Bimini.

“…Should we be looking for somewhere else to go? Should we be trying to find other avenues of income? Are we going to be let go? …We have no direction.”

Many of the resort’s employees who were residents of Grand Bahama and New Providence have since returned to their home islands.

Another employee told Eyewitness News that he and other employees were more “upset” about the lack of information on the closure.

He said employees were just sent home with no conversation, discussion or even follow-ups on the state of the company.

“From July to now, we haven’t gotten a word from work. We haven’t heard anything from the resort — like you would hear from Baha Mar and Atlantis. We aren’t hearing from Resorts World at all.”

While the hotel remains closed, it seems as if some restaurants are still open and offering service at the Hidden Treasure and the Sushi Bar, as well as a Thanksgiving At Home menu.

Other tourist destinations on the island, including the Bimini Big Game Club, are now open and accepting guests.

Bimini and Cat Cay have recorded 76 cases of COVID-19 as of Wednesday. Residents on Bimini were recently scolded by Prime Minister Dr. Hubert Minnis after a video of a large party was circulated on social media.

One North Bimini resident said while she understands the need to continue to follow protocols, the country must move forward and decide what the new normal will be.

“Everyone is saying about living a new normal and we have to get on with our new lives but they’re not allowing you to,” the woman told Eyewitness News.