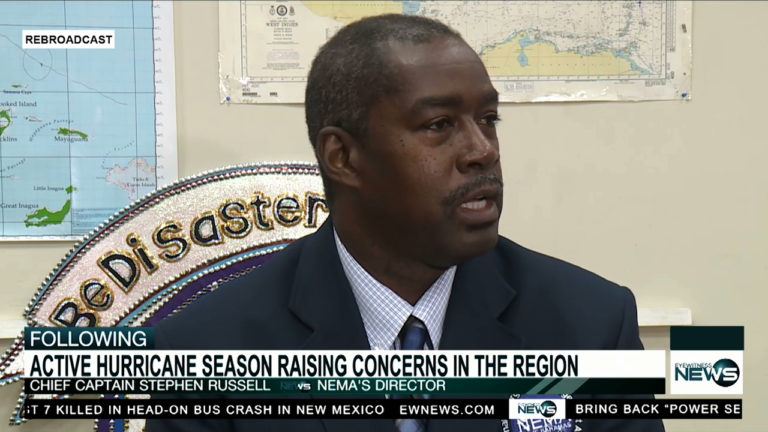 As The Bahamas moves into the peak of the hurricane season, the National Emergency Management Agency (NEMA) urges residents, companies, schools, churches and government ministries and departments to bring hurricane preparedness measures to a completion.

Basil Dean, Chief Met Officer, announced during a Press Briefing at NEMA headquarters, Gladstone Road, Tuesday, September 11 that The Bahamas is expected to be indirectly affected by Hurricane Florence as it draws closer to the Carolinas.  Very large sea swells with wave heights of 18  to 20 feet are anticipated to hit the coastlines of islands including Abaco, Eleuthera and Cat Island.

“Major, large swells will be a major problem for residents along the coast. We’re asking beachgoers to stay out of the water during this period. We expect the swells to remain through Friday at which time they are expected to subside a bit.

“Up until then, large swells will continue to impact the northern east coast of these islands and will be amplified during high tide. We anticipate high tide around 9:28 am in the capital, and in Eleuthera, 9:48 when we will experience the full impact of sea swells. The Glass Window Bridge in Eleuthera will be impacted by this. We’re asking residents and motorists to exercise extreme caution. Once swells begin we’re asking them to cease using the bridge until conditions have subsided,” said Dean.

Captain Russell appealed to persons in North Eleuthera to refrain from traversing the Glass Window Bridge during the swells. He recalled that a visitor who was sightseeing at the Glass Window Bridge lost his life in the aftermath of a weather system earlier in the year.  Administrators in Northern Eleuthera will be advised to close the bridge at a certain point in time during severe weather.

“We must stress that when the Bridge goes into a rage as a result of swells coming across the area people are to refrain from going in that area,” said Captain Russell.

Captain Russell expounded on hurricane preparations in effect by NEMA.

Improvements to communications, evacuation plans particularly for disabled persons, senior citizens, and young children, and its shelter program, are among the efforts to assist in the response and recovery plans of NEMA.

As a result of a Japanese Grant Aid of $1.8 million to assist with equipment for a disaster response programme, NEMA has received “key” assets to improve its logistics and transportation capabilities including a tractor head, a crane, freezer containers and 3 trucks.

“We’ve asked (the Japanese government) for some 40 base radios and 200 hand-held radios. Our aim is to ensure that in every district where there is an administrator, there is a radio camp set up with 8-12 handheld radios to have them better communicate within their districts,” said Captain Russell

Fifteen marines from the RBDF and officers from the Ministry of Works have been trained to operate the crane. Next week, officers are expected to be trained in how to operate and maintain the freezers and manage the tractor heads and trucks.

Captain Russell said the assets will greatly enhance recovery and response operations throughout the entire Bahamas.

“Once the roll-on, roll-off vessel is operational, and we have personnel and equipment to move between our warehouses to disaster-stricken areas, the aim is to reduce the timeline in getting supplies to an impacted area.

Members of the press were given a tour of the equipment which is scheduled to be officially presented to The Bahamas government in October.

This article was written by KATHRYN CAMPBELL, Bahamas Information Services.