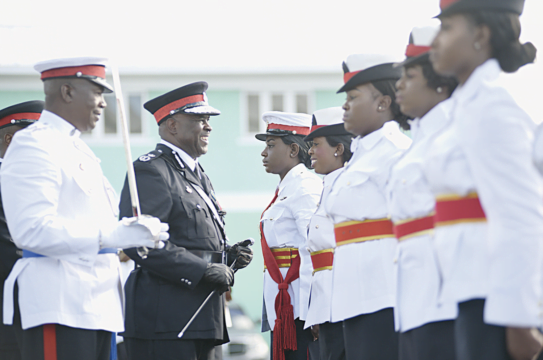 An audit into the Royal Bahamas Police Force’s (RBPF) reservist branch has revealed that there was a practice of retired officers re-enlisting in the reserves program and retaining their rank or being promoted to higher ranks “without justification or standardization”.

The Royal Bahamas Police Force Reserves Audit 2019, which follows a manpower audit of the wider body in April last year, noted that while the Police Act provides for four ranks for police reserves —constable, sergeant, inspector and assistant superintendent — there were 10 operational ranks when the audit was conducted.

“In fact, one reserve officer had a higher rank than the commandant with responsibility for the reserves brank,” the audit revealed.

“The 65 positions when compared to the totality of strength translated into 5.3 percent of the reserve officers holding position which were not accounted for in the Police Act,” the report read, though it stated that these positions were approved by Cabinet.

“Of interest to note was that the assigned reserve officers holding the unaccounted ranks were all retired senior police officers.”

In June 2012, the Christie administration confirmed plans to bring back on several senior police officers for their expertise to help in the government’s fight against crime.

Among those officers to return to the force was Stephen Seymour, who was promoted to assistant commissioner, and headed the reservists.

Seymour was appointed senior assistant commissioner in November 2014, along with Anthony Ferguson (now commissioner of police), Emerick Seymour, who was placed on leave in March, and Leon Bethel, who retired in late 2016.

The report continued, “The current structure could not serve to better meet the needs of the traditional force if its operational structure was in violation of the Police Act of if its rank structure was unorthodox.

“In its current state, the police reserves’ organizational structure did not mirror its original purpose and the new loose system of rank structure had been allowed to flourish and it had placed the organization at a distance from its supportive role to the traditional sector.”

According to the audit, for the past decade reserves have been allowed to work up to 150 hours per month, and in any given year, 1,800 hours, up 837 percent from the allotted hours provided by the Police Act.

The Police Act notes that police reserves were required to work an average of four hours per week throughout the year, with an entitlement of four weeks’ vacation per year; and not reserve officer should engage in police duties for more than eight hours on any given day except where necessary to manage an operational contingency.

It further paid $6.4 million in the current fiscal year, according to the report.

“It should be noted that the budget allocation for reserves’ allowances were submitted and approved by the Ministry of Finance based on trends observed in reserve officers working hours,” the audit read.

“Consequently, in some instances, the Payroll Office had to use contingency funds on a monthly basis to meet the salary requirements for reserves.”

The report said the salaries only reflected approximately 50 percent of the reserves as a large percentage were inactive – reserve officers who had not reported for ‘active duty’ or failed to report for duty.

Despite this, there were many discrepancies in time sheets which resulted in over payment for some officers.

According to the audit, many reserves worked up to or in excess of 200 hours with the hope of being compensated for the additional hours, which were well over the permitted 16 hours per week or 64 hours per month.

Data collected from the Payroll Office revealed that approximately 263 reserves worked 150 or more hours, while 22 exceeded the 200-hour mark.

“Perhaps this would be the most appropriate time to note that the reserves program was intended to be a volunteer program and not full-time employment,” read the report.

“Not even full-time civil servants worked more than 173.3 hours in any given month.

“Also, as previously alluded, reserves were not to work more than eight-hour shifts, except where it was necessary.

The 135-page audit pointed to numerous deficiencies with the reserves program, ranging from a lack of a proper system to account for its strength; no standardized definition for active or inactive status; no clearly defined expectations for the performance of enlisted personnel; a lack of proper record keeping of the activities of reservist officers.

The program also lacked proper systems to monitor the activities of reserves, inclusive of retention, hours worked, time-sheets, firearms certification, and professional deployment at any rank, according to the report.

“Many of the reasons for the poor management stemmed from the reserves branch not providing adequate deployment of such officers based on their knowledge and skills,” read the audit.

“Therefore, many were deployed with little thought for proper utilization of their abilities.

“It should be noted that another major concern for both commanders (officers in charge of a division) and reserves was the enlistment of retired officers into the program.

“Both reserves and commanders felt that the institutional knowledge was not transferred by such officers upon entering the program.

“In fact, many used their institutional knowledge to their advantage as oppose to benefitting the organization.”