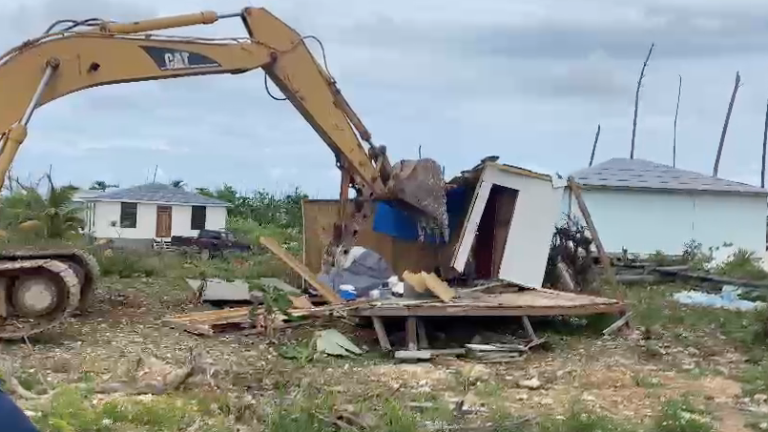 A tractor tears into a structure in a shantytown on Abaco in May 2021. (PHOTO: THE MINISTRY OF PUBLIC WORKS)

NASSAU, BAHAMAS — The government will have to wait some time longer to learn the fate of its application to appeal the Supreme Court’s June order extending an injunction preventing the demolition of shantytowns.

Justice Cheryl Grant-Thompson reserved her decision yesterday after hearing arguments from both sides.

The application to seek leave to appeal comes as the judge prepares her decision on the judicial review of the shantytown matter and the legality of the government’s demolishing shantytowns.

At the time, the judge ruled the government would have to seek court approval before proceeding with demolition on the island ravaged by Hurricane Dorian in September 2019.

The government began seeking to rid The Bahamas of shantytowns in 2018, but was blocked after Smith, who represents a grouping of shantytown residents, filed for judicial review.

During the appeal hearing yesterday, Kayla Green-Smith of the Office of the Attorney General said the determination of the substantive issue would not affect the legality of the government’s actions following Dorian, which destroyed nearly all of the shantytown communities on Abaco.

She argued there was no factual basis for an injunction that restrains the government’s activities post-Dorian.

She also made the case the judge erred in balancing the rights of residents of shantytowns with the change of circumstances on the island following the storm.

She said the rights of individuals living in shantytowns would not be determined by the judicial review and there is “no logical or rationale basis for seeking to balance those historic rights that are in the judicial review with the change of circumstances, which by definition is not an issue.”

Green-Smith submitted the judge erred in considering it was appropriate to restrain the exercises under the 2019 Disaster Reconstruction Authority CT, and said the judge misunderstood the operation of the act “and overstepped the court’s proper constitutional bounds” in ruling court sanction was necessary to proceed with powers under the act.

“In that regard My Lady, we say that the learned judge failed to recognize that after a disaster zone has been declared under the 2019 act, it is the Disaster Reconstruction Authority, which exercises powers under that act,” she said.

“The DRA is a separate and independent legal entity from the government and is not a party to the judicial review proceedings.

“The judge therefore misunderstood the operation of the act.”

She asked the court to grant leave to appeal and a stay of the June 9 ruling, pending the determination of the appeal.

In response, Smith said the court should be minded of its resources and that of the Court of Appeal to avoid what he called abusive, frivolous appeals that have “no prospect of success on the appeal”.

In respect to the stay application, Smith said the only people who the injustice will be visited upon are the poor, potentially homeless people who still have some “meager roof over the heads”.

“And if the stay is granted, human beings, hundreds – literally – of human beings will be banished to the bush when the tractors roll in again to demolish what is left of their homes, post-Dorian,” he said.

He said while the government’s argument relies on changes in circumstance, “as if the visitation of Hurricane Dorian is some God-given right to the executive branch of government to take whatever action”, the application was nothing more than an abuse of the process of the court, and premature.

At one point, Smith said the government should “just wait”.

He said the court’s ruling in June simply maintained the status quo until the ruling.

“There is no crisis. There is no emergency. What on earth can be propelling this government now to continue a policy of kicking people out of their homes and demolishing their homes while the Supreme Court is writing a decision on the legality of the judicial review? he asked.

“It is premature. It is a waste of time to be rushing off to the Court of Appeal to try and argue something that is likely to be argued on the full appeal.”

He said while counsel relied on the powers of the DRA to pursue its demolition exercises, the executive branch and not the DRA was making the appeal and are a part of the judicial review.

Smith also contended that it was the minister of works and Ministry of Public Works that erected notices of demolition and eviction in shantytowns and not the DRA.