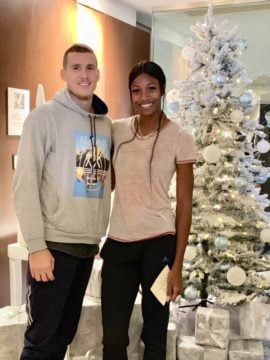 NASSAU, BAHAMAS – The family of Bahamian Olympic gold medalist, Shaunae Miller-Uibo, on Thursday debunked a fake report which alleged that the top Bahamian athlete and her husband, Maicel Uibo, drowned while fishing in Lake Ontario, Canada.

Miller-Ubio’s family confirmed on Thursday that nothing could be further from the truth, as Shaunae and her husband was not in Canada in recent days and continues to train for upcoming sporting events.

The online report alleged that Shaunae’s family members were informed of her demise by The Bahamas’ High Commissioner to Canada, Alvin Smith.  However, Eyewitness News spoke with Smith on Thursday, who vehemently denied such ‘malicious’ actions.

“I was shocked because no such information came to The Bahamas High Commission in reference to this matter, and the report stating that we had informed her family of the tragic incident, that is absolutely not true,” Smith said.

This latest fake report of a Bahamian athlete’s demise comes on the heels of a report that circulated on social media last month, which claimed that Bahamian Olympian, Debbie Ferguson-McKenzie, had passed away.

Yesterday, Smith said the level of insensitivity displayed by persons writing and circulating such reports is quite “disturbing”.

“This isn’t anything that you want to just play with or have fun doing,” Smith said.

“So far I have checked my phone from The Bahamas and I have had 11 missed calls. If something like that had happened, my minister, [Foreign Affairs] Minister Henfield, my permanent secretary and my director general, they would have been advised instantly and immediately.

“Even if I were not here, the High Commission would have forwarded that information. That is an absolute fabrication as far as we are aware and nothing of that sort came to our attention, and it is my understanding that Shaunae is competing.”

People disseminating false and malicious news in social media better be mindful of what they post. The US is now requiring that persons applying for a Visa to now submit emails, social media accounts and phone numbers for the last 5 years.; so check it before you wreck it.