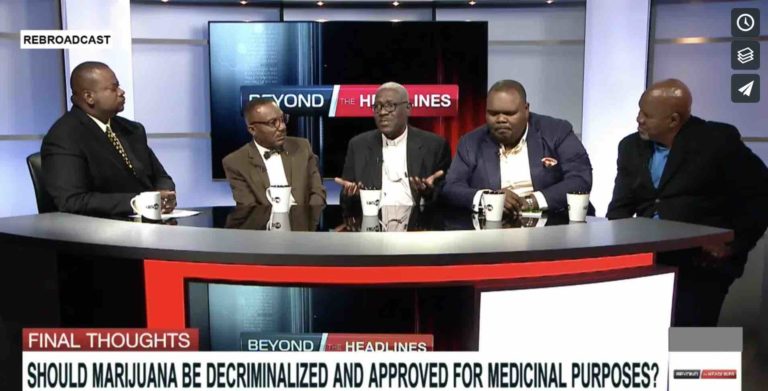 The Bahamas government has exhibited open reluctance to the idea of decriminalizing marijuana until recently, according to former Christian Council President and Caricom regional commission member Bishop Simeon Hall.  While appearing on Beyond The Headlines (BTH), Hall said the government is considering the possible positive medicinal effects of the plant.

“It may appear that most people in the country are opposed to the plant being legalized, but there are still a large portion of Bahamians that are in support of legalizing marijuana if only for the health benefits, not to mention, the positive impact it may have on the economy,” he said.

“Marijuana needs to be decriminalized so that we could help some young men,” he said. “Part of the marijuana commission that I served on for two years is the element of social justice.

“How can we marginalize so many of our young men?”

He concurred with Caricom’s Regional Commission’s recommendation to decriminalize cannabis, which he said grows on every island nation in the Caribbean. ;

Hall implores the government to do further studies on the topic.

Community Leader and The Hope Center’s (THC) founder Carlos Reid strongly feels the plant ought to be decriminalized, but he is still not in support of legalizing the plant for recreational use. He noted that many young people experiment with the drug and when caught with a joint they are penalized; however he said they should not “obtain a life sentence” prohibiting them from traveling.

“If the person goes to the Embassy to apply for a Visa and was convicted, even if (only for) a joint, they [U.S. Embassy authorities] don’t (specify) a joint; they say drugs and America has a serious issue when it comes to drugs.

“So I support entirely 100 percent that we need to decriminalize marijuana particularly among our young people because it’s really placing them in a messed up state,” Reid said.

He continued, “I don’t support the legalizing of marijuana but persons need to be able to use it for health reason; I have no problem with that.”

Medical professional Dr. Lynwood Brown agreed that marijuana should be decriminalized because of the vast medicinal positive effects the plant offers.  He informed the BTH host Clint Watson that there is currently an act that allows physicians to prescribe marijuana to their patients.

“The Drug Act permits physicians to prescribe it,” Dr. Brown confirmed, “but the challenge is, once it’s prescribed, how do patients gain access to it because pharmacies don’t stock (it) – that is the major challenge.”

According to Dr. Brown, many doctors are not aware that they have the powers to write a prescription for medicinal cannabis now.

He claimed that many are not educated in the study of marijuana and how to use it to help their patients.

Dr. Derek Pinder, a naturopathic physician strongly feels that The Bahamas needs more education on how the plant can help many Bahamians.