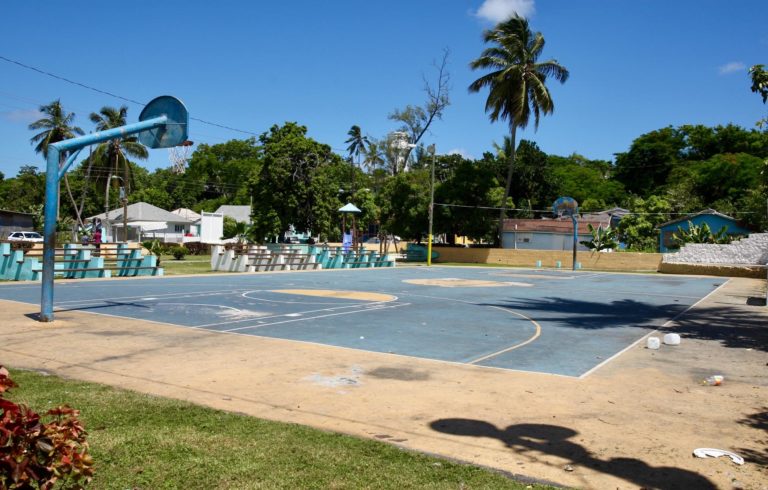 Father Marshall Cooper Park in Mason’s Addition and McPherson Park on Hay Street are to be re-developed for the enjoyment of residents in the area. Park users would have access to Wi Fi and other amenities to enhance their park experience. It is part of the Over-the-Hill Community Development Partnership Initiative, being overseen by The Over-the-Hill Unit in the Office of The Prime Minister. (BIS Photos/Kristaan Ingraham)

Residents in the Over-the-Hill communities are set to enjoy safe and remodeled public spaces in keeping with the Prime Minister’s vision of transforming poverty-stricken areas.  Under the Over-the-Hill Community Development Partnership Initiative, the scope of work has already been rolled out for upgrades to several parks, which have been historic landmarks in the areas.

Overseeing this rejuvenation process to restore public spaces and recreational facilities within the inner city communities is The Over-the-Hill Unit in the Office of The Prime Minister.

Monday marked the beginning of phase one of physical upgrades for some fifteen parks in the Over-the-Hill community.  The government and its partners viewed two parks to scout out the scope of work to be undertaken. Present were: Samita Ferguson, Executive Manager, Over-the-Hill Unit in the Office of The Prime Minister; a representative of the Bahamas Public Parks and Public Beaches Authority; Valentino Brown, a Lewis Street community representative; Pastor Heuter Rolle, Salem Union Baptist Church; Nathaniel McKinney, Rising Star Programme; contractors Timothy Gittens of G’s Contract Painting and Maintenance, and Vincent Gaitor of G & G Contracting Services; and Marvin Curtis of We care Painting and Maintenance.

The two spaces already identified for redevelopment are McPherson Park on Hay Street and Father Marshall Cooper Park in Mason’s Addition. Work is expected to be completed by early October.

Phase two of the redevelopment of parks is expected to begin in late September with the major re-development of the South Recreation Grounds.

Besides the physical upgrades to the parks, the Prime Minister also foreshadowed outfitting the spaces with technology for residents and other park users to enjoy public Wi-Fi for their own pleasure or to record and live stream any events at the park.

Other features to add to the park users’ experience are the installation of CCTV cameras by the Royal Bahamas Police Force; park wardens will be assigned for the day-to-day management of these public parks.

It is further anticipated that a park wardens system will provide training and employment opportunities for residents in the targeted areas of Over-the-Hill, and for residents to have ownership in their respective communities.

The physical restoration and maintenance of the Fr. Marshall Cooper Park and McPherson Park is overseen by the Bahamas Public Parks and Public Beaches Authority, and will focus on seating, lighting, courts, sports equipment, landscaping, sanitation and drinking water fountains.

Contracts for the upgrading of the parks upgrade have been awarded to three companies based in the Over-the-Hill area.