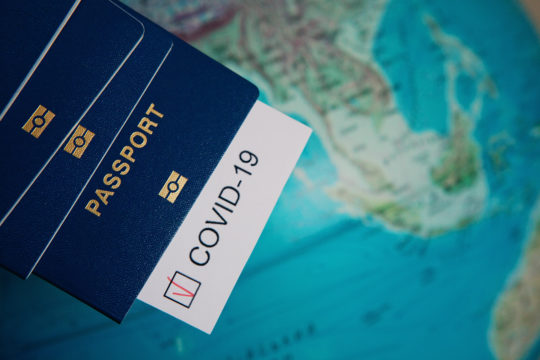 Ferguson-Pratt: The Bahamas is being compromised by use of fake COVID-19 tests

NASSAU, BAHAMAS — Two women and a man were fined $2,400 each for possessing and uttering forged documents in attempts to travel to the Family Islands on Wednesday.

The prosecution alleged that on March 31, at Lynden Pindling International Airport (LPIA), Stuart and Crosdale presented a Western Air agent and a COVID-19 ambassador a Doctor’s Hospital Health System negative COVID-19 RT-PCR test result, knowing it was not genuine.

The pair was arrested and told officers during their interview under caution that they were traveling to Abaco.

Stuart and Crosdale, who visibly wept in the courtroom, both pleaded guilty to the charges.

Crosdale’s attorney said she was traveling to Abaco to attend the funeral of a family member who died suddenly.

Stuart, who is a single mother of three, said she was also going to Abaco because she was related to the deceased person.

She also said her sons were in Marsh Harbor and she was anxious to see the island since she had not visited since before Hurricane Dorian hit in September 2019.

Sobbing, she apologized through tears as she begged the court for leniency.

She said she works hard to do everything for her kids, who are honor roll students.

She said she cannot be seen to “give a slap on the wrist” in this matter and that a “clear message” must be sent to deter individuals from such behavior.

She also questioned whether someone had to be paid to make the fake tests and insisted that police must bring those individuals creating the forged documents before the courts because they are the “masterminds” but are the ones who are free.

“This does not add up and it doesn’t make sense,” Ferguson-Pratt added.

“If action is not taken to immediately stop this, the country will be compromised.”

The prosecution alleged that while at LPIA, Evans presented a forged RT-PCR COVID-19 test result to a Bahamasair agent and a COVID-19 ambassador to travel to Eleuthera.

He was arrested and cautioned and when officers asked him about the offense, he gave no comment.

Ferguson-Pratt once again underscored the serious implications of the matter.

“The whole Bahamas is being compromised,” she said, pointing to recent cases of forged COVID-19 tests being used for travel to islands including Andros, Abaco, Exuma and Eleuthera.

One defendant was also reportedly traveling from Freeport to Andros when he was arrested at LPIA with his one-year-old child.

Ferguson-Pratt said: “And these are the ones that were caught.”

She also added that the conduct of the defendants smears Doctor’s Hospital, which is a premium healthcare facility in the country, in apparent “skulduggery”.

She noted that if the facility is implicated, the actions would compromise its integrity.

Ferguson-Pratt fined all three individuals $1,200 on each count to be paid immediately or they would begin serving eight weeks in prison.

She warned the defendants that the matter is too serious and that it is “not worth it”.

She also added that the conduct of the defendants smears Doctor’s Hospital, which is a premium healthcare facility in the country, in apparent “skulduggery”.

She noted that if the facility is implicated, the actions would compromise its integrity.

Really..well the 2 ladies they had to let go on saturday after 5 hours off pure foolishness..they could see their test was real with all the proof but so what…doctors hospital huh…didnt give a crap..to help them and done take the peoole $134.40..all wants to address the fake ..what about the real authentic test people that got caught up in this foolishness with no apology no recourse no refund. Had to take new test. Well they did it else where no one will be so fool to go back to the same place for that to.happen.

I guess when it happens to.a big timer or some tourist , and CNN and FOX only then.will this part be addressed.

FErguson-Pratt need a medal. Fine I thought though was too little when you want to send a message , make it worthwhile and they have children where they have to set an example. message could be larger.

Blaming the tourists all along and yet we are doing this to ourselves.

This won’t stop until there are severe penalties.