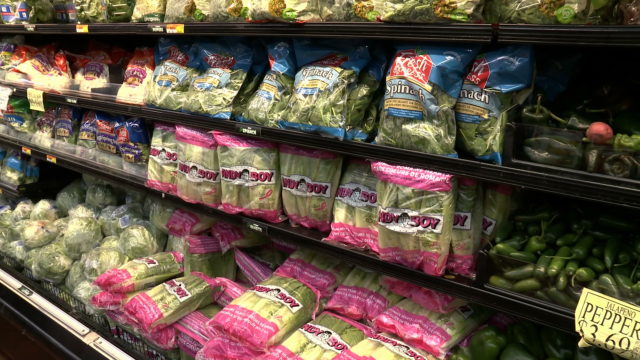 A series of food recalls in the United States (US), one of which directly impacted The Bahamas, has forced discourse about the country’s food security.

Government statistics show that The Bahamas imports close to 100 per cent of its food, putting Bahamian consumers at a high risk for impact of a mass recall.

In 2017, canned tuna and corned beef – both staples in many Bahamian household – had to be taken from shelves, after a massive recall in the US.

Earlier this month, over 206 million eggs were also recalled, with the Food and Drug Administration (FDA) advising that affected eggs were exported to The Bahamas.

A short time letter, romaine lettuce was recalled from shelves across the US following what the FDA said was an E. coli outbreak in Yuma, Arizona.

And while the Center for Disease Control (CDC) has said it is close to an all clear for romaine across the US, as of Tuesday, 172 people in 32 states had been sickened in the outbreak, an increase of 23 people and three states since the last update, a week earlier. One death has been reported, according to the CDC, while 75 people have been hospitalized, including 20 with kidney failure.

The outbreak is said to be approaching that of the 2006 baby-spinach E. coli outbreak that caused the death of five and sickened more than 200.

The FDA has said that it is still trying to discover exactly where and when the romaine involved in this latest outbreak was contaminated.

“These foreign countries look at us as being third world,” Miller claimed. “They dump all the extra items that they can’t sell locally as ‘export only,’ products.”

“Because we are a prime target, we – local food store suppliers – are then forced into overdrive, to ensure quality control.

“We have to police ourselves. When we see something advertised in the international media that there has been a recall, we have to check our shelves, pull them and then contact our supplier to let them know that there is an issue and try to get our monies back for it.”

The frequency of these international food recalls and the fact The Bahamas heads the region in non-communicable diseases (NCDs), is what has lead local farmer Dr. Selima Hauber to question the country’s food security.

“Many in the industry believe that small island developing states like ours, who depend on these international imports … are suffering from these NCDs, because we do not have direct and immediate access to fresh locally produced produce.”

But when attention is turned to the supplies of local farmers, Miller contends that product quality becomes a matter of concern.

“I think the biggest problem they (local farmers) face is that, not only product quality is an issue, but also the appearance,” he said.

“Take for instance Bahamian bananas. They are very tasty but, when compared to the international imports, the appearance of our local product is just not the same … We know that when Bahamians decide between the two, they will choose the more visually appealing product.”

Dr. Hauber cautioned though that Miller’s reasoning is still not adequate when it comes to the matter at hand, which is preventing Bahamians from having access to more fresh local produce.

She said Bahamians need to demand more of the local food store chains to do the right thing.

“If the consumer desires the local product and if they do not mind the inconsistency, then they need to tell their local merchant and produce managers that it’s more important to support local farmers, so that Bahamians get fresher produce,” she asserted.

“Sometimes I find that even when you buy locally it’s a little more expensive than when we compare it to products from abroad. So it’s a catch 22,” said Cartwright–Bastian.

“But we do need to seriously look into our food security and figure out a way to make this work for farmers, local food store chains and Bahamians, whose health is ultimately at risk at the end of the day.”

Regulators said recently that they intend to drastically decrease the amount of agricultural imports to the country by growing, processing, marketing and exporting our own food.

During the recent opening of the 2018 Agri-Business Expo, Deputy Prime Minister and Minister of Finance Peter Turnquest said government’s long-term goal is to drastically reduce the country’s reliance of imports.

“We want to see farming communities in our country prosper and grow to be able to contribute even more to our national economy,” he said.

Government statistics indicate that The Bahamas currently imports 92 per cent of its agricultural food products from overseas, but the deputy prime minister said government is committed to putting a dent in the number.