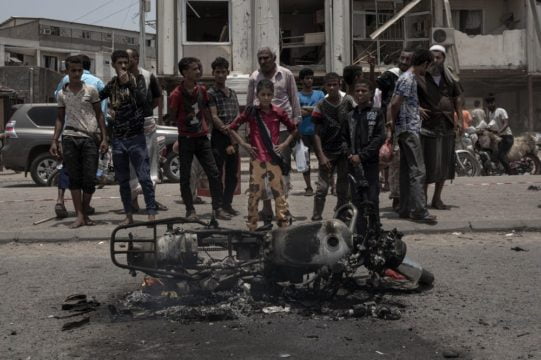 Civilians gather at the site of a deadly attack in Aden, Yemen, Thursday, Aug. 1, 2019. Yemen's rebels have fired a ballistic missile at a military parade in the southern port city of Aden as coordinated suicide bombings targeted a police station in another part of the city. The attacks killed at least 51 people and wounded dozens. (AP Photo/Nariman El-Mofty)

ADEN, Yemen (AP) — Yemen’s main southern city of Aden was shaken by double attacks Thursday, as a missile fired by rebels hit a military parade and suicide bombers blasted a police station. At least 51 people were killed in the deadliest day in nearly two years in the de facto capital of the U.S.- and Saudi-backed side in Yemen’s civil war.

Most of the dead came from the missile strike, which slammed into a parade of newly graduated fighters belonging to a militia loyal to the United Arab Emirates, known as the Security Belt.

Among the dead was a senior commander in the militia, Monier al Yafie, also known by his nickname Aboul Yamama, a security official told The Associated Press. Aboul Yamama had just given a speech to the graduates and had stepped offstage to get a drink of water when the missile struck the al-Galaa base. His body was torn in half, the official said, speaking on condition of anonymity because he was not authorized to release the details.

At least 40 people were killed at the base on Aden’s western outskirts, a health official said.

The earlier attack at the police station in the central Omar al-Mokhtar neighborhood of Aden, was believed to have been carried out by Islamic militants.

It pointed to the multiple dangers facing the port city, even though Yemen’s 4-year-old civil war is locked in a stalemate.

The northern part of Yemen is controlled by the Iranian-backed rebels, known as Houthis, who have positions on front lines as close as 100 kilometers (60 miles) from Aden and often hit it and nearby areas with missiles or bombs dropped by drones.

Islamic militants — from both al-Qaida and an Islamic State group affiliate — also operate in Aden. Their mass bombings had become less frequent, though assassinations and shootings regularly take place.

Aden is also at the center of stormy and often violent divisions within the Saudi-led coalition fighting the Houthis. Ostensibly, the coalition aims to restore Yemen’s internationally recognized government, driven out of the capital of Sanaa in the Houthis’ 2014 takeover. But the UAE, a coalition member, dominates Aden and the south through militias like the Security Belt that it funds and arms, sidelining the government.

Pro-UAE and pro-government militias waged bloody battles in Aden in early 2017 — fighting that Aboul Yamama was involved in. Since then, such violence has eased. But the UAE has begun withdrawing thousands of its troops from Yemen, saying it wants to give a boost to peace talks with the Houthis. Its reduced presence could open up factional tensions once more.

The Houthis claimed responsibility for the missile strike in a statement on their website by a military spokesman, Brig. Gen. Yehia Sarea. He said Houthis had fired a medium-range ballistic missile at the parade.

No group immediately claimed responsibility for the police station attack.

A car, a bus and three motorcycles laden with explosives detonated in front of the police station during a morning roll call, said Abdel Dayem Ahmed, a senior police official. Four suicide bombers were involved in the attack, which killed 11 and wounded at least 29, he told the AP.

The explosions tore off part of the building’s facade and blackened nearby structures, littering the street with shattered glass and debris and blasted a deep crater into the asphalt. The attackers’ motorcycles were still burning well afterward, and blood was splattered on a staircase inside.

“I felt myself flying in the air and falling down, hitting the floor,” said one senior officer, Zakarya Ahmed. “When I got up on my feet, I saw bodies burning, others torn into pieces.”

Deputy Interior Minister Ali Nasser Lakhsha told reporters as he inspected the site that it was unclear who carried it out.

“This is a horrific terrorist attack targeting our police,” he said.

The attacks were the deadliest in Aden since November 2017, when the IS affiliate in Yemen targeted the city’s security headquarters, leaving 15 dead, mostly policemen.

The conflict in Yemen began with the 2014 takeover of Sanaa by the Houthis, who drove out the internationally recognized government. In March 2015, the coalition launched its air campaign to prevent the rebels from overrunning the south.

Saudi-led airstrikes have hit schools, hospitals and weddings, killing thousands of Yemeni civilians. The Houthis have used drones and missiles to attack neighboring Saudi Arabia and have also targeted vessels in the Red Sea.

Iran has repeatedly denied supplying the Houthis with drone or missile technology, both of which the rebels have increasingly used, including to target Saudi Arabia. The kingdom has claimed that Iran supplied the missiles or at least helped the Houthis manufacture them from parts that were in Yemen before the war.

By MAGGIE MICHAEL and AHMED AL-HAJ