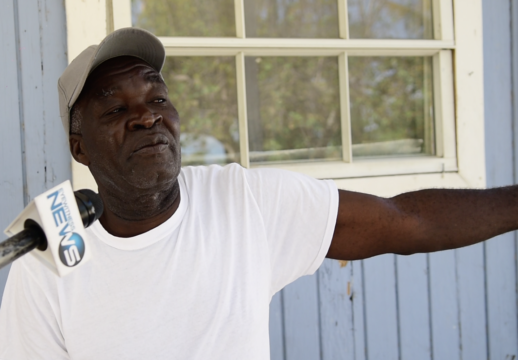 NASSAU, BAHAMAS — While some residents of at least three unregulated communities, otherwise known as shantytowns, expressed an eagerness yesterday to participate in the government’s land ownership program, others labeled the initiative a political tool for votes.

In Parliament on Monday, Minnis said Bahamians of Haitian descent living in unregulated communities are entitled to Crown Land opportunities.

Honorat, a mason and builder by trade, said he worked hard to put his daughter through school so she may have a better life, but she cannot afford to purchase a home.

He said if he cannot purchase land through the government’s program, his daughter, who is Bahamian, will.

“Long as I [have been living] here, I feel like buying that from government,” he said in broken English.

“I glad you’ve come to tell me that now. I want all the information from government on how I could buy that. I’ve been living here so long.”

Honorat lives with his wife and daughter in a small but well-built structure, outfitted with a concrete porch, pane windows and trimmings, off Carmichael Road.

The structures in the immediate area range in scale, with some boasting makeshift fencing while others were little more than assembled wooden panels, barely raised off the ground.

Honorat told Eyewitness News he built the home, and if given the opportunity to purchase land he will build his daughter their new home.

“That’s going to be happy for me with my daughter; to build a next house,” he said.

“I am going to be happy. She is working now and she could barely [afford] a good house. So, I need that to belong to me. That’s all I want to say to government now. I want that to belong to me because I know all that area of Cowpen Road and Carmichael Road is Crown Land.”

Another resident, a mother of three who did not wish to be named, said she has lived in The Bahamas since 1979.

“When I pay house, I don’t have money to pay house again,” she said, referring to the monthly rent she pays to an undisclosed landlord.

“I came here and see property. I made a house here. After that, [a] next man come in here and say: ‘That’s my property.’ I said OK.”

Her home has electricity, though there was no indication of running water.

The woman said she met the electricity supply in the area, and despite threats from the man who claimed to own the property, the power company has yet to disconnect the residents.

She said she would be quick to buy land at an affordable price.

“If the government wants to sell me piece, I ga’ buy that. My daughter ga’ buy that,” she said.

“…My daughter says once the government going to sell, she going to buy that.

“My boyfriend going to buy that, too. My son will have an apartment.”

Anthony “Horse” Jean-Pierre, a resident of a community off Cox Avenue, said land ownership for Bahamian-born citizens is a birthright and not something for the government to use as a tool.

“I feel everyone born in The Bahamas has a birthright through the almighty father,” he said.

“First of all, anyone who is in power, who is against these things, I feel are blaspheming.

“Now, we looking for a leader who can represent for the people, knowing that God made all these things for us and we are in need of these things.”

Jean-Pierre said he has to hustle for a living and does odd jobs including “picking up horse manure” to sell as fertilizer.

He said the government doesn’t understand how much the Bahamian people are hurting.

Another resident, who did not wish to be named, said he wishes to purchase land, but was skeptical about the prime minister’s promise and whether it would be followed through.

“He promised plenty things, and nothing happened,” he said of the prime minister.

“In the future, I’ll try to get my own land, but not with the government’s help because the government doesn’t help anybody; they only help themselves.

“As a Haitian Bahamian, plenty of us going through some process right here.

“Like America, as soon as a child is born, they get their stuff.

“Why can’t that happen here? Why we got to go through all that process?

When asked about the land program announcement, another resident of Cox Avenue said he was uncertain if it was a political ploy for votes or an “empty promise”.

“Only when that time comes, everybody will see for themselves what it is.

“Every party is promising right now what they ga’ do from what they ain’t gone do.

“But we know how the FNM (Free National Movement) and PLP (Progressive Liberal Party) go. It’s a juggle, bouncing back and forth. It’s a ping-pong and may the best man win. But once they get in power, they go back to the old ways.”

According to the prime minister, the land program will not be confined to New Providence, but offered on several Family Islands, including storm-ravaged Grand Bahama and Abaco.