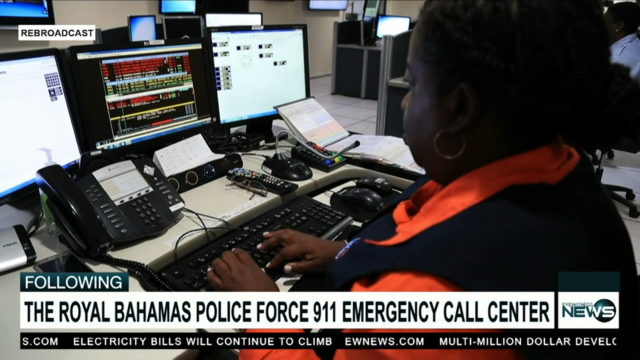 The Royal Bahamas Police Force’s (RBPF) Control Unit for its 911 Emergency Call Centre is without a monitoring system to track down its caller’s locations according to police officials.

Superintendent Officer Brian Miller who oversees the control room told Eyewitness News that operators receive over 1,000 calls per day with some 20 per cent of those calls being unrelated to emergency matters.

However, in an instance where someone dials 911 and may not be able to speak or have the time to give the operator an exact location, police and emergency medical services may be at risk of not having a quick dispatch response time if at all.

In the United States, E911 (Enhanced 911) is support for wireless phone users who dial 911, the standard number for requesting help in an emergency. Since wireless users are often mobile, some sort of enhancement is needed to 911 service that allows the location of the user to be known to the call receiver, this is according to an online article on www.searchunifiedcommunications.techtarget.com

“In an eight-hour shift – about 300 calls come in per shift – most are members of the public who are in an emergency but others are children who come home from school – making prank phone calls,” Superintendent Miller said.

One operator pointed out that the amount of phone calls made by children that are non-emergency related take a larger portion of that 20 per cent of unrelated emergency calls.

“There is a part of our system, our E911 where the number shows up but once persons have their number private with BTC I think it tends to cause a problem that causes the number not to reflect,” he said.

“We’d like to have it A1 but when persons have their numbers blocked it poses a problem.

“And, most Bahamians have blocked numbers, but we need that assistance from agencies to do their part.

“Another huge problem is children, parents need to monitor them, during the summer time and Christmas time when children are out of school more unrelated calls come in.

“Our biggest issue is persons actually knowing where they are, while there are a number of roads that don’t have names, knowing simple east and west directions are just as vital.”

According to Superintendent Miller, there are eight persons that work an eight-hour shift of the control room, and, while the team is relatively compact, its size poses no threat to the duties being carried out.

“The officers in the police control are multi-talented, normally the 4-12 shift is the busy shift,” he said.