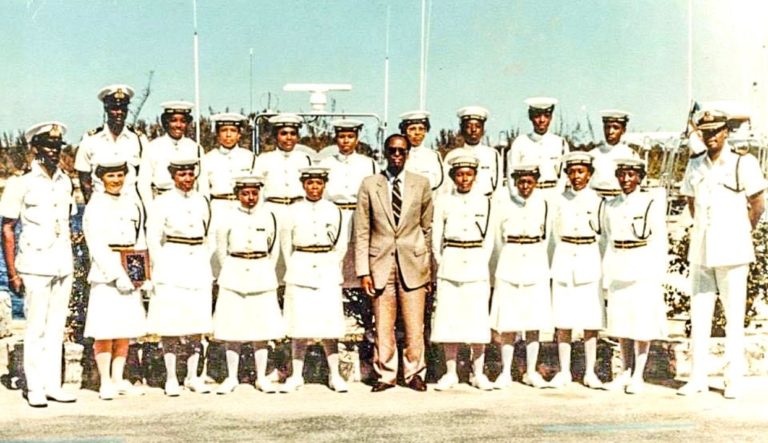 A photo of the RBDF's first women entry.

NASSAU, BAHAMAS — The Royal Bahamas Defence Force salutes the first group of women to enlist in the organization 35 years ago.

Under the leadership of Commodore Livingstone Leon Smith, this entry was allowed to enlist on October 28, 1985.

Following a group of former Police Marines who transferred, and a total of 17 all-men entries, the time had come to enlist women into the organization.

Sergeant Ella Mae Rolle of the Royal Bahamas Police Force assisted the New Entry training as a chaperone during the nights, and Ena Mae Rolle, a civilian who served as an Executive Officer in the Ministry of Defence, assisted during the days.

In July 1987, both Cheryl Bethel and Gaye Major-Bykowski were the first RBDF females to both successfully complete a nine-month course at the Britannia Royal Naval College (BRNC) in the United Kingdom to become the first Commissioned female Officers in the Royal Bahamas Defence Force.

Marsha Grant-Chriswell and Verna Wood would subsequently follow as the second group of women to convert to the Officers Corps.

Julianna Major and Aura Pratt were the first women to attain the rate of a Senior Enlisted, and Idamae Ferguson holds the distinction of being the first woman to be advanced to the highest position of an Enlisted – that of a Warrant Officer.

Of this group, Commander Cheryl Bethel remains the only current serving member. Although the other women have all since resigned or retired, they have all made valuable contributions both as trailblazers for future women, and performing their duties with distinction. The organization remembers Cynthia Edgecombe, who has left an indelible mark and has since passed away.

As the organization commemorates its 40th anniversary “Beyond the Horizon and Into the Future”, the Commander Defence Force, Commodore Raymond King and the Officers and Marines pause to say ‘Bravo Zulu’ to these pioneering females who have stood out as trendsetters for a great force.