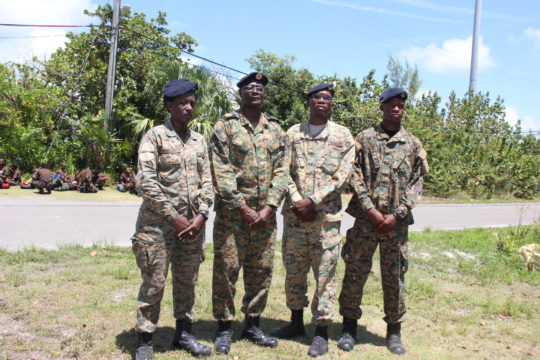 The three Marines; Marine Seaman Cyril Davis, Woman Marine Alexis Strachan and Able Seaman Michael Gibson were part of a security support team that was monitoring approximately 50 Defence Force Rangers who were on a 70-mile expedition when the incident unfolded around 10 a.m. on Cowpen Road.

He told the media that the Rangers Instructors were at a security checkpoint on Cowpen Road sometime around 10:00 a.m. Saturday, waiting for the young Rangers in training to pass by.

He said upon pulling along the northern side of Cowpen Road in their vehicle, they witnessed an individual walking from the southern side of a track road with a belt around his neck.

“One of my comrades, Strachan, stated that, ‘something has to be wrong’. He [the individual] looked at us and he said, ‘hi and goodbye,’ as if it was his last goodbye,” Gibson recalled.

“When I saw that, I was driving the bus and I turned the bus on and started to approach him. He did not really see us, but he ran up the tree and Marine Seaman Davis hopped out of the bus.

“By the time that Davis got out of the bus, he had already tied the knot on top of the limb and he had stepped off [the limb] and was hanging.”

Gibson said Marine Seaman Davis tried to push the man upward to relieve the pressure on his neck, but he was unsuccessful.

He noted, however, that there were two Ranger Cadets who were also in the bus watching the incident unfold.

Gibson said one of the Ranger Cadets attempted to climb the tree and lift the gentleman’s body [upwards] to relieve some of the pressure off the neck, but their efforts were futile.

“When I saw that none of this was working, I hopped out of the bus,” Gibson recalled. “It’s a good thing I had my knife on me at the time.

“I climbed to the top of the tree, cut the belt loose and when he dropped he was unconscious. Davis caught him and we lift him to the side of the street.”

Gibson said after the man was rescued from the tree, he remained unconscious and they attempted to revive him by pouring water on his face.

“When he did come back [to consciousness], he started crying and he was in tears,” Gibson said.

“We were trying to get him to speak and say what was happening, but he could not give us any information at the time.

“We waited on the ambulance, we contacted the police [as well as] our Chief Petty Officer Bain and the paramedics came and took him.”

The Able Seaman said the entire ordeal unfolded within 10 to 15 seconds.

“Everything happened rally really fast,” Gibson said. “When he said, ‘hi and bye,’ it was like he wanted an audience. I guess we were there at the right time to save a life.”

Meanwhile Gibson told the media on Sunday that every moment of life is precious.

He said that while many persons are facing problems, they must remember that life is precious and they must find someone to talk to about their issues.

A statement issued yesterday by the RBDF also advised persons who are unable to cope with the pressures of life, to seek the help of pastors, priests, human resource personnel or social workers.

Rangers Director Lieutenant Delvonne Duncombe, said the three Marines who luckily thwarted Saturday’s suicide attempt are trained to be observant and he is happy that they were able to step in and save a life.

“As Gibson said we are about guarding our heritage. Whether it is the Rangers program or the citizenry of the Bahamas, this is what Marines do,” Duncombe said.