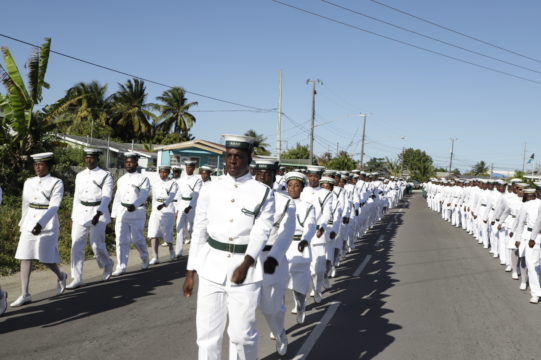 NASSAU, BAHAMAS – Minister of National Security Marvin Dames commended the Commander Defence Force, Officers and Marines of the Royal Bahamas Defence Force (RBDF) for a “productive year” and for their continued success in protecting the country’s territorial borders at the force’s annual church service on March 31, 2019.

Also in attendance at the service were the Governor General of the Commonwealth of The Bahamas, Her Excellency The Most Honourable Dame Marguerite Pindling, heads of the Royal Bahamas Police Force (Commissioner Anthony Ferguson), Bahamas Customs and Excise Department (Dr. Geannine Moss), Bahamas Department of Correctional Services (Commissioner Charles Murphy), along with members of their respective departments including Bahamas Immigration Department.

The apprehension of over 170 poachers with 160,000 pounds of fisheries products resulting in the foreign poachers being awarded approximately eight million dollars; joint operations with the Police Force in reducing reducing crime; the expansion of the Rangers program in the Family Islands were just a few of the outstanding accomplishments by the defence force that were highlighted by Minister Dames during his remarks.

Minister Dames also informed attendees that the first in a series of coastal radars to be funded by the US State Department has been installed in Inagua, and will be commissioned in a few weeks. He further stated that the Government-approved multi-agency drone program will be coordinated by the Royal Bahamas Defence Force, and that a successful bidder for the provision of drones and training of drone pilots will be announced soon.

The pastor of the church, Apostle Christopher Russell, delivered a strong message urging the officers and marines to commit their lives to service and to know that the work they do can oftentimes be a thankless one. Pastor Russell, who is also a former member of the Defence Force thanked the members for their invaluable service.

The officers and marines concluded the day with a military parade of officers, marines and RBDF Rangers through the streets of Nassau. The procession concluded on the grounds of the C.W. Sawyer Primary School.

The RBDF became an official entity on March 31, 1980 with the passing of the Defence Act in Parliament. Since then, the force has grown into a vibrant organization with over 1,500 Officers and Marines.